Home » Magazine » What's On » Fighting, suffering and death in the wars of the French Revolution and of the First Empire

Fighting, suffering and death in the wars of the French Revolution and of the First Empire

The principal languague of the event is French but at least one of the papers will be in English.

This symposium entitled Fighting, suffering and death in the wars of the French Revolution and of the First Empire takes part in the renewal of studies concerning the historical anthropology of war focusing on the 1789-1815 period. To start with, violence in all forms will be the topic of a questioning bases on the  chronological point of view. Is it relevant to consider the period as a time of strong reorientation sided with an increase in importance of the “ideologising” of violence on the battlefield ? By setting the analysis at the level of fighters, our purpose is to think about the sufferings that are inherent to war. 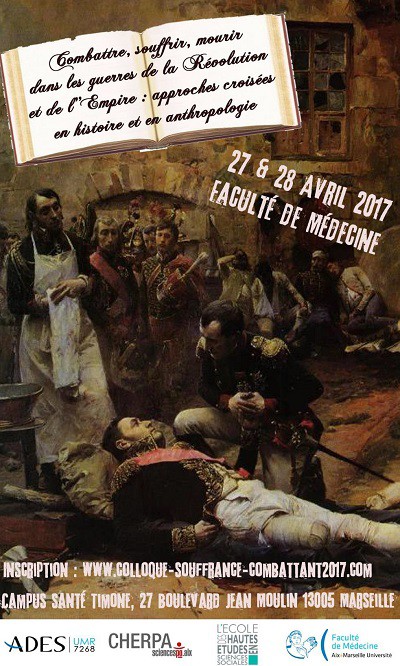 ‘The bloody solution to the crisis, the effort aiming at the annihilation of the enemy is the legitimate son of war.‘ Clausewitz’s conclusions that are encapsulated in the phrase ‘absolute war’ do entice one to think beforehand about the question of the ‘brutalization’ of war in its diversity and its complexity.

This avenue of research has been explored for a few years through a cultural approach by historians specialised in the 18th and 19th centuries. The works of François Furet and Patrice Gueniffey on the originality of the nature and expression of political violence from the French Revolution onwards corroborate the empirical analysis of many War Studies thinkers and encourage a new reading of the war phenomenon in the 19th century, as well as they lead one to think about violence in combat or in soldiering. The works of Jean-Yves Guiomar (who defines total war as ‘the one that sets in motion unprecedented amounts of troops, eager to win and cause the enemy’s utter destruction‘) and that of American David Bell come to terms on the idea that the French Revolution is a breach from the former, regulated, Old Regime type of war.

In this symposium entitled Fight, Suffer, Die in the Wars of the Revolution and of the Empire, we would like to take part in the renewal of the debate concerning the historical anthropology of war by focusing on the 1789-1815 period. To start with, violence in all its forms will be the topic of a questioning based on a chronological point of view. It will be broached from the standpoint of the fighters’ suffering, be it physical or psychological. Is it relevant to consider the period as a particular moment in the evolutions of violence? What evolutions can be observed in terms of wounds? Can these new types of violence be articulated with an increase in importance of the ‘ideologising’ of war?

We would like to place this symposium in a perspective based on disciplinarian opening and on an exchange of ideas between historians and anthropologists. We will particularly insist on:

If the 1792-1815 period is at the core of our thoughts, it will also be worth referring to longer periods according to the relevance of the topic. We would like to take into account all war times in France, in Europe, or even overseas as long as they are linked with the dynamics of revolution (Santo Domingo, Egypt).