Home » Magazine » What's On » Napoleon and Bertrand, the return of the heroes

Napoleon and Bertrand, the return of the heroes

As part of the bicentenary of the Emperor’s death, this exhibition, which will take place from 18 June to 31 October at the Musée Bertrand, Chateauroux, aims to enable a wide audience to discover – or rediscover – some of the representative objects in the collection bequeathed to the town of Châteauroux by the former Grand Marshal of the Palace, who was among the faithful servants who accompanied their master to St Helena.

Entitled “Napoléon et Bertrand, le retour des héros” [“Napoleon and Bertrand, the return of the heroes”], this retrospective will bring together the emblematic works of the two men, from their stay on St Helena between 1815 and 1821, until the Return of Napoleon’s Mortal Remains (“Retour des Cendres”) in 1840. Paintings, prints and engravings, furniture, clothes and personal memorabilia will evoke the role of these two personalities whose destinies were intimately linked, and the different episodes of their years of exile, before the legend took over their story.

In addition to the permanent collections, some thirty rare items will be on display: emblematic portraits, landscapes or sketches taken on the spot, model ships and, above all, clothes that belonged to Napoleon or his loyal general. Appropriate signage will enable visitors to find their way around the specific sections, but also to find, within the usual museum circuit, the other objects or works directly related to the theme chosen and presented in the museum’s permanent spaces.

Finally, a recreational area, based around a spectacular diorama and illustrated with “images d’Epinal” or contemporary creations, will welcome the youngest visitors, for an immersion in the “Napoleonic” world, past and present. Organised in partnership with several institutions, in particular the Ville Impériale brand and the Association du Souvenir Napoléonien, this exhibition is part of the numerous events both national (Paris, Malmaison, Fontainebleau, Ajaccio, Brienne, Lunéville, Ile d’Aix, etc.) and international (from Waterloo to St Helena) proposed throughout 2021 (“Année Napoléon”).

To accompany this event, curated by David Chanteranne, a special programme will also include a literary salon, a series of talks and school workshops. In addition, an exhibition catalogue, a children’s booklet and a board game will be published. 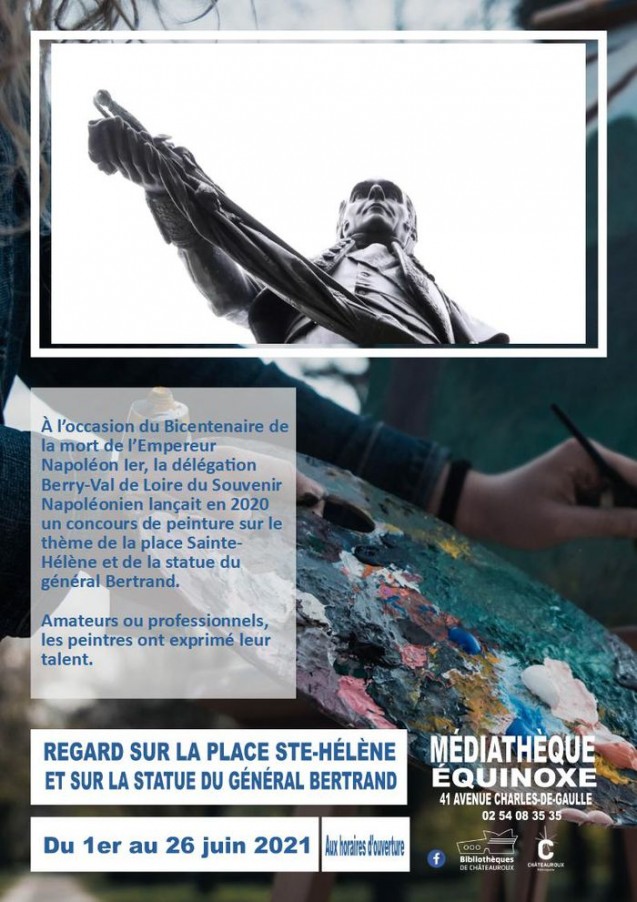 Also in Chateauroux, until 26 June , you can see the winning entries of the painting competition

For other Napoleonic things to visit in Chateauroux:

Chateauroux is a partner of “2021 Année Napoléon”