Home » History of the Two Empires » Articles » [2021 Année Napoléon] A look back in pictures and videos at the ceremonies of 5 May 2021, in Paris and on St Helena

[2021 Année Napoléon] A look back in pictures and videos at the ceremonies of 5 May 2021, in Paris and on St Helena

Here are some images and videos of the ceremonies held on 5 May, at the Dôme des Invalides and at the Institut de France in Paris, as well as those which took place on 5, 6 and 9 May at the French Domains on St Helena.

– 9.00 am: laying of a wreath by the Souvenir Napoléonien at Napoleon’s Tomb, beneath the Dôme des Invalides. The delegation was accompanied by re-enactors from the 10e de ligne.

– 10.30am: Wreath laying by Prince Napoleon and the Fondation Napoléon at Napoleon’s tomb, Dôme des Invalides

– 11am: mass in the Cathedral of Saint-Louis des Invalides

Some photos of the ceremony at Les Invalides, 5 May 2021 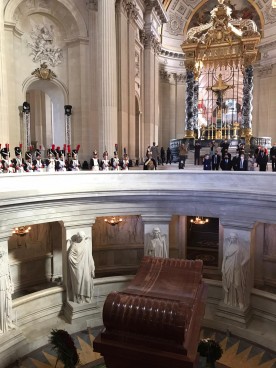 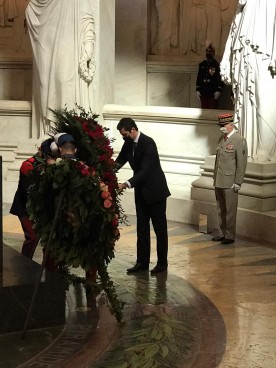 Prince Napoléon lays a wreath at the tomb, 5 May 2021© Fondation Napoléon - A. Mongin 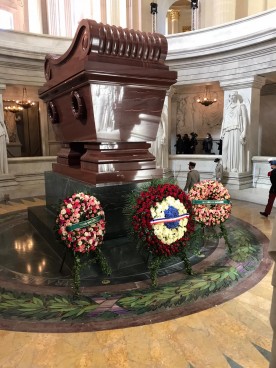 – 4.30pm: speech by the President of the Republic Emmanuel Macron at the Institut de France, preceded by an introduction by Professor Jean Tulard, delegate of the Académie des sciences morales et politiques (who was also present at the commemoration of the bicentenary of Napoleon’s birth in 1969)

– Around 6pm: Wreath laying by the President of the Republic Emmanuel Macron in the presence of Prince Napoleon and their wives at Napoleon’s tomb, under the Dôme des Invalides.

The French Domains of St Helena and the Fondation Napoléon teamed up with the Saint Helena Napoleonic Heritage Ltd, with the help of Sure Saint Helena, Creative St Helena, John I Isaac Contractors, to bring you live the commemorations of the bicentenary of the Emperor’s death on St Helena.

At 5.30 pm, the broadcast of the ceremony began, with readings from the writings of Generals Bertrand and Montholon, interrupted by a minute’s silence at 5.49 pm (GMT) the time of Napoleon’s death, followed by the Last Post. The day ended with a vigil in the gardens of Longwood House.

– 6 May 2021: from 9am (GMT), a memorial mass at Longwood House, recalling the Lying-in-state of Napoleon at Longwood.

On 9 May, 2021, a short and beautiful ceremony took place commemorating the funeral and burial of the Emperor Napoleon on Mr Torbett’s land in the Sane Valley, St Helena. Representatives from the island, the Fondation Napoléon and the Souvenir Napoléonien laid wreaths at the empty tomb and Eric Barthe read extracts from the Memoirs of the Grand Marshal Bertrand to sumptuous drone footage of the valley and the path leading down to it. Graeme Beckett played the “Sonnerie aux morts” and the “Reveille”. A moving programme of Napoleonic music was played by instrumentalists and singers from the island, including a march by Giovanni Paisiello (Graeme Beckett, Jordana Peters, Isaac Greentree), the traditional Scottish folksong “Ye banks and Braes”, that Napoleon so enjoyed at Longwood on hearing Betsy sing it (Teeny Lucy and semi choir), the anonymous “Buonaparte’s March” (Graeme Beckett, Kerry Lawrence, Jordana Peters, Jenni Ratcliffe), Grétry’s “La Victoire est à nous” (Teeny Lucy, Isaac Greentree), Dalayrac/Boys’ “Veillons au salut de l’Empire” (Joe Hollins soloist with the semi choir), the “Lacrimosa” from Mozart’s Requiem (Teeny Lucy, Jenni Ratcliffe), and finally Étienne Méhul & Marie-Joseph Chénier’s “Chant du depart” (Joe Hollins, Teeny Lucy and Jenni Ratcliffe soloists and the choir comprising Julia Benjamin, Sophia Abraham, Emma Dee, and Gay Marr). The Emperor would have been proud of them!

Waterloo Heroes At 2pm on 18th June 1815 Serjeant Francis Styles charged with Wellington’s Heavy Cavalry against the massed ranks of French infantry who were attacking the allied position. Styles and his…