The originality of the Hegelian philosophy lies in its philosophical, rather than historical interpretation of Napoleonic politics. The powerful admiration of Hegel for Napoleon, admiration stressed by all the commentators of the german philosopher, admiration shared equally by one of the most famous interpreters of Hegel, A. Kojève, matters little here.
What is important is that Hegel’s perspective is not historical, but philosophical : by pondering over universal history, Hegel intended to draw the philosophical meaning from Napoleonic politics. In terms of his philosophy, Hegel does not look at the world from the point of view of original history, nor from the point of view of reflexive history, but ascends to the point of view of philosophical history (1). This is why understanding the Hegelian interpretation requires first an understanding of the Hegelian philosophy of history. What are its dominant features, which apply here? I would say there are three which suffice. First, that universal history is ruled by the Absolute; then, that the Absolute is realized dialectically and progressively in the dramas, comedies and tragedies of history; finally, that heroes, nations and states constitute the successive instruments of the accomplishment of the Absolute. Here is the famous Hegelian theme of the guile of Reason, of the artifice of Reason that Hegel probably borrowed from Greek tragedy.

As far as the philosophy of history is concerned, what is the first trait of the Hegelian vision of the Napoleonic hero ? A famous passage is often quoted. It is an extract from the letter Hegel addressed from Iena to his friend Niethammer, October 13th, 1806, when he had just finished writing The Phenomenology of Mind : ” I saw the Emperor -this soul of the world- go out from the city to survey his reign; it is a truly wonderful sensation to see such an individual, who, concentrating on one point while seated on a horse, stretches over the world and dominates it. ” (Correspondance, T. I, p.114). The fact that the greatest philosopher of modernity finished writing The Phenomenology of Mind on the eve of Napoleon’s entrance into Iena, one of those events which ” happen once every hundred or thousand years ” cannot be, in an Hegelian perspective, the result of historical contingency because the beginning of the end of political history coincides with the end of philosophy : Napoleon achieves on the level of action what Hegel carries out on the level of thought. Napoleon realizes the Absolute about whose science Hegel expounds in The Phenomenology of Mind. 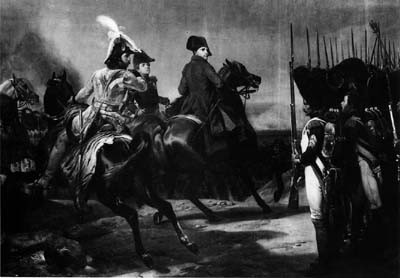 However, what is the knowledge we can gain from the scene described by Hegel ? That day, Hegel did not have to say his morning prayer, that is, he did not have to read the newspapers, because the historical reality, the actualization of the Absolute was happening before his very eyes. Furthermore, Hegel saw Napoleon go out from the city and go on reconnaissance, but Napoleon himself did not see Hegel : Hegel knew therefore what Napoleon was doing while Napoleon did not know what Hegel was doing.

Napoleon was, therefore, carrying out, without knowing, the Hegelian philosophy of history : instrument of the Absolute on the scene of the world, Napoleon was becoming the hero of modern history. Finally, if Napoleon’s action consisted of a tangible actualization of the Absolute, such action must have been aesthetically beautiful. This is why Hegel wrote to his friend Niethammer that ” it is a wonderful sensation to see such an individual ” : Napoleon’s action was both extraordinary and admirable.

What could be, then, the second feature of Hegel’s Napoleonic hero ? Hegel admires Napoleon because he is a man of action : this is why, in the above mentioned extract, Hegel wrote to Niethammer that Napoleon goes out from the city to go on reconnaissance, whereas the historical hero, being a man of action, is a constant feature of the Hegelian philosophy of history. As Hegel wrote in Elements of the Philosophy of Right (& 348) : ” At the forefront of all actions, hence of historical actions, stand individuals or subjectivities which effectively cause the substantial reality to occur. ” In Lectures on the Philosophy of History, written a few years later, Hegel teaches his students that historical heroes ” are practical-minded men. ” (p.35). Napoleon, like Alexander and Caesar, is thus a man of action : he is not what he thinks, neither what he hides, but what he does. In The Phenomenology of Mind, he had already developed this idea : ” The real being of man lies rather in his deed; it is in this deed that individuality is effective… the individual is what this deed is. ” (p.231). While writing these sentences, Hegel may have thought of Napoleon. This is the quite plausible hypothesis of J. Hyppolite, great commentator of Hegel :

(1) Let us recall three definitions : the original history is the immediate history, written by the witnesses or the actors; the reflexive history refers to the historical science; the philosophical history defines the philosophy of history.
(2) This point of view can be connected to Goethe's : "That is why Napoleon was one of the most productive man who ever lived." Conversations de Goethe avec Eckermann, p.551 (Gallimard).
(3) Kojève considers, in his Introduction à la lecture de Hegel that Napoleon is to Hegel, at the end of the chapter 6 of the Phenomenology, preceding the exposition of the absolute knowledge, " the God who appears." Kojève is wrong because the expression refers to the Christ and because Napoleon is a hero, that is a demigod.
(4) Whether or not Chateaubriand held the Comments in hands, as he wrote in Mémoires d'Outre Tombe, he places anyway Napoleon at the same level as Caesar.
(5) Chateaubriand calls Napoleon "the man of the battles."
(6) On the contrary, one of the reasons for the opposition of B. Constant to Napoleon was that he hated the antique city and philosophy.
(7) Hegel, director if the Nurnberg Gymnasium from 1808 to 1816 admires the regulation of the french high schools. See the excellent edition by B. Bourgeois of the pedagogic texts of Hegel (Vrin ed.).
(8) Was this constitution applied ? Rambaud doubts it.
(9) Napoleon is a reader of Corneille : he would have made him Prince.
(10) After Napoleon's death, Hegel reads Le Memorial, Gourgaud and Montholon. From Berlin, Hegel writes to Van Ghert : "In Brussels, according to what I am learning, there is a reprint of the Mémoires sur Napoléon, from Gourgaud and Montholon ; could you ask the bookkeeper to send me an issue?" (Correspondance, T.3, p.14). Let us recall that the Napoleonic literature is then submitted to the Prussian censorship.
(11) The monarch is the individual who makes the decision : he signs. This Hegelian idea is illustrated by the session of the Council of State, February 19, 1811. (See Le Souvenir Napoléonien, ndeg.397, p.26).
(12) May, 21st 1813, in a letter addressed to Niethammer, Hegel laughs at the Bachkirs, the Cossacks and " other excellent liberators." (Correspondance, T.2, p.12).
(13) Let us recall two judgments, the first one from Chateaubriand, the second from Goethe : " Isn't everything over with Napoleon?" (Mémoires d'Outre Tombe, 25th Book), "his life was the march of a demigod, from battle to battle and from victory to victory; One could say about him that he was in a perpetual enlightenment : that is also why his destiny had such a fame that the world had never seen before him, and will maybe never see after him." (Conversations de Goethe avec Eckermann, p.550).