Whilst it is true that nowadays in winter in cities and towns the world over, children of all ages in search of a turn on the ice can find an outdoor rink in the town centre, Parisians of the First Empire looking for a quick skate had to go to the flooded and then frozen fields near Paris at the hamlet known as La Glacière (the Glacier, then near Gentilly) or to the Canal de l'Arsenal.

Skating as such was reserved for men. Ladies would sit in sleighs built in the form of carriages or boats, and these would then be pushed or drawn by the gentlemen.
A short book published in 1813, entitled Le vrai patineur (The true skater), was illustrated with a number of “action shots”. Here we see the frozen ponds at La Glacière in a very rustic setting.

The author of the book, Jean Garcin, gives an amusing account of the crowds on the canal de l'Arsenal: “men of every age and class were there, the most experienced competed in agility, whilst others clung desperately either to their neighbours or to their valets in an attempt to keep their balance.”

The ladies in their carriages – these were designed as gondolas, as swans with their wings spread, or as crocodiles with their mouths open (!?) – drove their 'teams' as best they could. And if you wanted to warm up, all you had to do was go to one of the beverage tents pitched around these natural skating rinks. 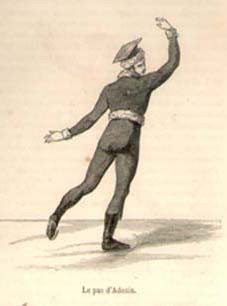 With his illustrations, Jean Garcin certainly intended to entertain, but he also wanted to raise skating to the rank of a serious art, taking his inspiration from dancing. For this reason he also included in his book a large number of “steps”, to which he gave charming names, such as the Renommée (fame), the Saut du Zéphyre (the zephyr's leap) and the Pas d'Apollon (the step of Apollo), not forgetting of course topical names such as the Roi de Rome (King of Rome).

As for the last chapter, it could have been called “On the dangers of skating”. Here Garcin deals with the ideal conditions for skating (it is wisest, he notes, to wait until the thermometer has been “minus two” for at least two days before venturing out onto the ice). He also gives pertinent advice as to how to get out of a frozen pond if the ice breaks, although the water must only be waist deep…
It is true that today's outdoor rinks in the town centres have less rustic charm, but they are in the end a little bit safer!