Home » History of the Two Empires » Articles » The Campaign in Egypt

The Campaign in Egypt

The chronology for Egypt

As has been pointed out by Thierry Lentz (Souvenir Napoleonien, no. 418, 'Pourquoi l'Egypte', pp. 11-19), Napoleon's reasons for an expedition to Egypt were at once emotional as well 'Real-politik-al'. The emotional taking its strength from the Egyptomania of the second half of the 18th century (one has only to think of Anthanasius Kircher and his remarkable, illustrated books on the near and far east). The political being the Directory's desire to distance from Paris a dangerously powerful military man flushed with his spectacular success in Italy, and that Directory's and Napoleon's own interest in attempting to remove Britain's powerbase on the Indian sub-continent and avenging the losses of the Seven Years War, notably Canada and the colonies in the Indies.
The British government on hearing that Napoleon had set sail from Toulon for Egypt ordered Earl St Vincent, the commander in chief of the British fleet, to send Nelson to scout around Toulon and to follow French naval movements. But with Nelson's own ship dismasted by a storm and his division dispersed, the squadron was forced to return to Gibraltar. On June 7, reinforcements arrived, bringing Nelson's flotilla to fourteen. In the meantime, on June 10 the French fleet (commanded by the vice Admiral François-Paul de Brueys-d'Aigalliers) with Napoleon, having eluded the British, took Malta (the island offering no resistance). After staying on the island for a week, Napoleon headed for Alexandria, landing nearby on 1 July 1798 – the landing at night unfortunately caused some deaths. The city was taken the following day. Possession of Lower Egypt was assured on 21 July by victory at the Battle of the Pyramids, which took place in the historic surroundings of the Pyramids of Gizeh. The Mamluk army of 6000 attacked the French forces arranged in squares. This first attack was repulsed with Mamluk losses of 300 men. The subsequent French attack and flanking movement caused the Mamluks to lose a further 1500 men, either killed or driven into the Nile. Napoleon entered Cairo on the following day, with their ruler, Mourad-Bey, in flight before him.
At sea, however, things were less certain. The British fleet under Nelson was hot on Napoleon's heels – although, as his correspondence with the Earl of St Vincent reveals, throughout most of June and July Nelson had absolutely no idea where the French fleet was. Indeed in June, Nelson (lacking reconnaissance vessels) actually overtook the French fleet, arriving in Alexandria before them. Finding the port empty, he returned to Sicily where his ships were re-supplied. He then returned to Egypt at the end of July in the final hope of finding the French fleet. He came upon the ships at 5pm on August 1, 1798, about an hour before sunset, in the Bay of Aboukir, about 20 miles east of Alexandria. Much ink has been expended on the suitability (or otherwise) of de Brueys's position and Napoleon's orders on the subject. One camp maintains that Napoleon had left de Brueys the choice of anchoring in Aboukir or harbouring in Corfu (recently become a French possession). Others maintain that Napoleon ordered de Brueys to remain in Aboukir (perhaps to protect the transports in Alexandria harbour) and that it was de Brueys who wished to head for Corfu. At any rate, Napoleon is known to have sent a messenger encouraging flight to Corfu, but the messenger was intercepted and killed and de Brueys never received the order. There is similar dispute as to the suitability of de Brueys's position at anchor in the bay. As ship's ensign Lachadenède remarked, this position 'went counter all the principles of the art of strategy. We were anchored at seven fathoms and the depth did not rise to four fathoms for about half a league. Hence between us and the land there was enough room for a vessel to manoeuvre'. Other opinions noted that the position was a strong one. Nelson himself in his famous letter of the 3 August 1798 to the Earl of St Vincent recalled 'The Enemy were moored in a strong Line of Battle for defending the entrance of the Bay, (of shoals), flanked by numerous Gun-boats, four Frigates, and a Battery of Guns and Mortars on an Island in their Van'. And de Brueys mentioned in a letter to Napoleon of 13 July 'I have been taking up a strong position in case I am compelled to fight at anchor'. 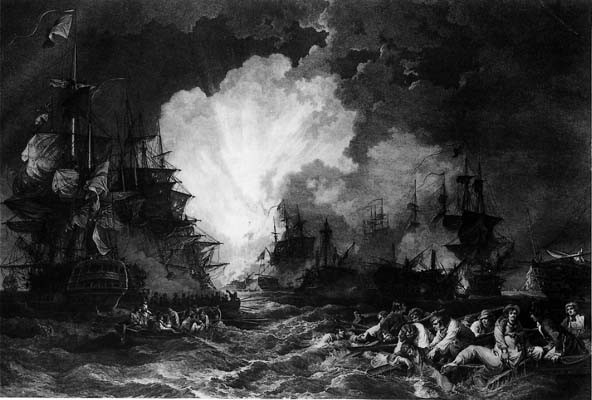 De Brueys was however caught unawares. With no ships keeping watch, he was not uninformed early enough of Nelson's arrival – some of the sailors were indeed foraging on land. Furthermore, orders for the ships to be linked by cables to stop enemy ships coming between them had not been obeyed. That being said, de Brueys's position (with in addition the battery on the island) appeared a strong one (de Brueys believed it so, and at the admirals' council of war before the battle, Villeneuve, Decrès and Ganteaume supported his decision to fight at anchor) and with nightfall only an hour away, no-one could have expected Nelson to take the dramatic decision to attack. But during the battle, de Brueys's weaknesses and Nelson's strengths became all too clear. De Breuys's ships were anchored slightly too far from the shoals on the landward side of the Aboukir island (indeed the English ship Culloden ran aground on this shoal – it did however subsequently act as a beacon for following English ships). Nelson's devastating tactic of giving broadsides from both sides at once left the ships in the vanguard, Guerrier, Conquérant, Spartiate, severely disabled. And although the flagship L'Orient, in the centre of the line, dismasted the English Bellerophon, and the English Majestic received similar treatment from the French vessel Tonnant, this battle fought at night by the light of the burning ships was clearly going horribly wrong for de Brueys. After fierce fighting, L'Orient was caught in-between Alexander and Swiftsure and suffered serious damage – de Brueys, though wounded in the head and the arm (and trying to stop the flow of blood with a handkerchief), refused to have his wounds tended below. On being taken down to his cabin, however, he was seriously wounded by a cannon ball. At this point he ordered his men to take him above board, saying 'a French Admiral ought to die on his own quarterdeck'. At about ten o'clock, the fire which had caught in the ship reached the magazine and with a spectacular explosion the vessel blew up – there was silence for about five minutes and then the battle recommenced, to finish at about 3 am. Fighting began again at 5 am to finish at about 3pm as Villeneuve escaped with the two frigates La Diane and La Justice and the warships Le Guillaume Tell and Le Généreux.

No British ships lost – 200 dead, 700 wounded.
Eleven French warships lost and two frigates – two warships and two frigates escaped – 1,700 dead, 1,500 wounded.
Perhaps the worst French defeat of the whole Napoleonic period. And unlike at Trafalgar its results were felt immediately. Without a fleet in the Mediterranean, France could no longer run the Egyptian campaign satisfactorily – Malta subsequently returned to British control. The Turks declared war on France, 4 September, and as a result of the lack of naval support Napoleon was to meet with failure at the siege of St John d'Acre. From Alexandretta Nelson sent a messenger to Bombay to inform of the 'glorious battle fought at the Mouth of the Nile' and the 'great victory'. The British under Wellington invaded Mysore and in 1799 Tippoo Sahib died defending his capital. And all French designs on India died with him.