Share it
On 27 March 2013, the Musée de l'Armée in Paris will play host to one of the most important exhibitions about Napoleon. Entitled Napoléon et l'Europe, it will bring together numerous artefacts, works of art and documentation to illustrate Napoleon's singular destiny, his military campaigns and the cultural and political changes that they brought about. Emilie Robbe, director of the exhibition, spoke to us about it.

Irène Delage: an exhibition dedicated to Napoleon and Europe is opening at the Musée de l’Armée on 27 March. Napoleonic Europe, Europe against Napoleon… what are the aims of this exhibition?

E.R: Between 1793 and 1815, events in Europe were turbulent. Napoleon Bonaparte, First Consul and subsequently Emperor of the French, played a determining role with his military victories, but also, to an arguable greater degree, with his politics.
In bringing together objects and contemporary testimonies, the exhibition aims to present a synthesis of the upheavals in Europe and the political decisions they led to. It also aims to answer some of the questions which arise, questions which we are still asking ourselves about Europe today.
On the one hand, there is the question of the European-wide project that Napoleon attributed to himself in the Mémorial de Sainte Hélène. We ask how he changed Europe, whether he really planned it, and by which means he administered and controlled territories and populations. On the other hand, we examine the reactions which followed his decisions. How was Napoleon's ambivalent dynamism perceived in Europe? What was his attitude in regards to the growing feelings of nationalism in Italy, Germany, Poland and Spain? Great, medium and even small powers – how did they envisage integrating, keeping distance from or even resisting his projects? What were the reactions of monarchs, the elites and the people to Napoleon and his far-reaching politics?

I.D: To what degree does this exhibition differ from the first one, presented in Bonn at the beginning of 2011? 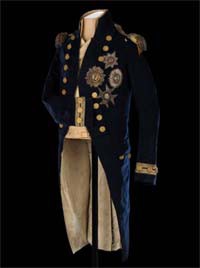 Bonaparte Crossing the Great St Bernard Pass by David. Put into the context of the beginning of his command, the work takes on a European dimension which is rather unexpected. Alongside these prestigious works, the exhibition also displays smaller and more unusual pieces, such as a fan which depicts a harebrained plan to invade Great Britain in 1798 (private collection).
Our aim is to display items which play off each other, reflecting the complex legacy surrounding the figure of Napoleon in Europe, that of an evocative dialogue between, on one hand, a sketch by David of the famous Consecration or Coronation (now in the Louvre) and on the other, a caricature by the Londoner Cruikshank, which completely derides the ceremony.

I.D: What would you like visitors to get from their visit?

E.R: Working on this project has meant putting into question a number of received notions about Napoleon and his impact in Europe. Our wish is that people can discover the richness and complexity of Napoleon.
For this reason we've paid special attention to providing our visitors with the means to understand the context in which Napoleon's actions took place. Who influenced him? Who were his contemporaries? How did he become what history remembers him as, a “great man”? Who were his enemies? Why did he fail? Each nation, each European country has treated Napoleon's legacy differently, and the figure of Napoleon today still belongs to all Europeans.

The British Witnesses to Napoleon | Napoleon 200 The death of Napoleon in far off St Helena in May 1821 brought to a crescendo twenty-five years of English-language publishing on the Emperor. Thousands of pages, including the Emperor’s…