Emilie Robbe: the Musée de l’Armée and the ATHENA project

It's the rentrée in France, the moment when people go back to work, children go back to school, and the summer rolls to a close. It is also the moment for us to look back on the the Musée de l'Armée's ATHENA project. Launched in 1996, the project, to redevelop and modernise the Musée de l'Armée, has recently come to an end as we enter the third quarter of 2009. Irène Delage spoke to the curator of the museum's Modern Wing, Emilie Robbe, about ATHENA and what to expect from the redesigned galleries.

Irène Delage: The ATHENA project, to redevelop and modernise the Musée de l’Armée, was launched in 1996. Can you recap for us the details?

Emilie Robbe: Although created over a hundred years ago, in 1905, the Musée de l'Armée had only ever undergone one large-scale reorganization, at the end of the 1960s. Thirty years later, it had become clear that a process of modernization, which would take into account the expectations of the public, the wishes of the board of trustees, and the services offered by the museum, was necessary. The ATHENA project was thus conceived, the aim of which is to reinforce the bond between the nation and its army, whilst at the same time moving away from a museum built around objects to a museum of history. The name ATHENA is actually an acronym, evoking both the richness of the museum's collections and the diversity of themes that the museum considers: arms, techniques, history, emblems, nation, army. The acronym is at the heart of this modernization program which will reaffirm the museum's position as the most prestigious and most visited institution on the banks of the Seine.

I.D.: What issues were at stake in a project of this magnitude? 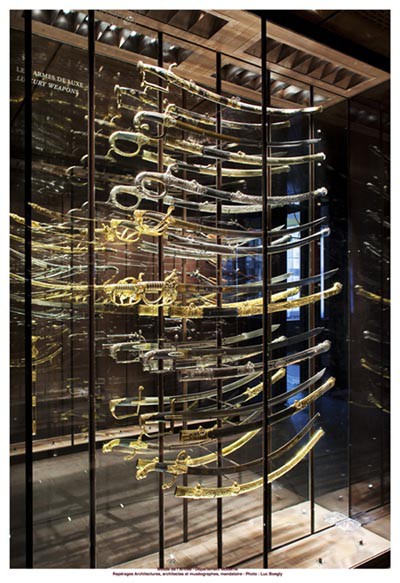