In 1994, Glenn initiated a cultural tourism research development project based on the French Presence in Pietermaritzburg and KwaZulu-Natal. Her research started with the Prince Impérial, Louis Napoléon who was killed in Zululand on 1 June 1879 in an ambush.

Marie de Bruchard: How did you hear about the history of the Imperial Prince?

Glenn Flanagan: I first heard the story of Imperial Prince when I was in high school in 1993. Before that I had heard something through my French teacher at University, the Breton, Françoise Chupin. Françoise had attended the commemorative events for the centenary of the death of the Prince in 1979 in Uqweqwe. Their Imperial Highnesses Prince Napoleon and Princess Napoleon and Jean-Claude Lachnitt were also there.

In 1993, I wanted to set up a Franco-Zulu excursion with my French pupils, so I asked a colleague, a History teacher in high school where we taught at the time, to give me some notes about this young French prince who died in an ambush during the Anglo-Zulu war! And as they say, “the rest is history!” I was totally captivated by the sad, poignant and tragic fate of the Imperial Prince.

M.B: Your project to bring to greater awareness the presence of the son of Napoleon III in South Africa is impressive. What was the biggest challenge you have encountered?

G.F: Well, nobody knew who he was! They wondered what was he doing here etc. But “everybody” knows the Anglo-Zulu wars and the Anglo-Boer wars. So that was the context I went with, and in this way people were more interested in knowing.
The biggest challenge was to convince my colleagues in the tourist industry of the potential of this cultural and historical development that links France, French-speaking countries, Francophiles, the KwaZulu-Natal province and South Africa. And also to explain to impoverished communities (and others) that what I'm doing is motivated by passion and my own interest – There are no funds to pay me a salary, my car, and my research trips! I work voluntarily.
It's true that it's always a hard struggle to find the financial support to be able to highlight all the work in a way that is visible to the public – exhibitions, leaflets, publications etc.

M.B: It is sometimes difficult to talk about the fate of the Imperial Prince in France. How do the South Africans perceive this character?

G.F: First, there is an appreciation in general for all things stereotypically “French”. Of course there are some folk who are not especially french fans, but the extraordinary fact of a Frenchman here on the English side never fails to strike people! At the reception of the Great Tourist Gathering in Durban every year – the INDABA – the Zulus always say that they ended a dynasty, but that the Prince behaved bravely (he fought like 'a lion') – they respect him.
For others (especially women and young people) who are sensitive to the story of a character, they feel pity for this young man. Men sometimes are sometimes a bit hard-hearted!

M.B: Do you have a particular or unusual anecdote or encounter that you can tell us about this project? 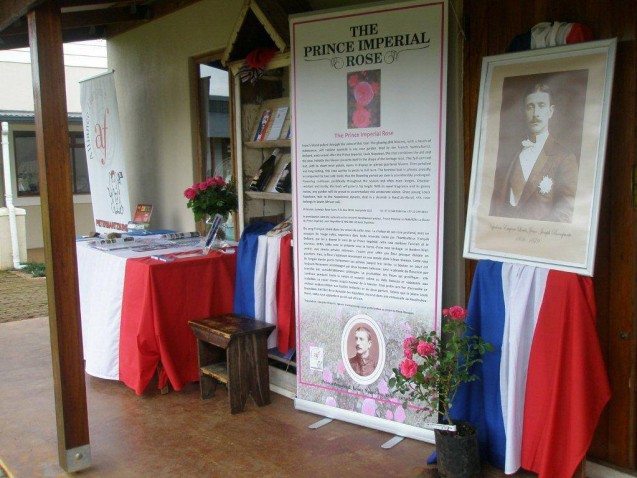 G.F: Several… but I think in particular of the major steps that mark the development of this project with the constant support of the Embassy of France in South Africa and Jean-Claude Lachnitt:

– the exhibition and public announcement of the project in 1995
– the launch of the Route du Prince Impérial (1996)
– the “baptism” of the Rose (1998)
– the presence of the Foreign Legion of the Comoros when they presented me with my medal, Knight of the National Order of Merit – and the fact that I had not had a clue what was going to happen!
– the multi-cultural presence (Zulu, Scottish, Afrikaner, South African) at the commemorative ceremonies for the Prince when I manage to get funds to pay the travel costs of the musicians and dancers. Now, alas, these funds are impossible to get!
– the museum (Interpretive Wall) at the monument built in 2006 (supported by the youth of the Reunion)
– The Imperial Wine in 2008 and in 2012. Now we really need a “sparkling wine” for the Prince! I'm still looking…
– the great honour that was granted to me in 2012: Chevalier de la Légion D'Honneur. I still cannot believe it, and I am very touched and very moved.
– visits to places associated with the history of the Prince and his family – in France, England, Spain, Switzerland, on St. Helena, and in Australia
– meeting people associated with this project, and with the Prince:
– H.I.H. Princess Napoléon (a great woman and I was touched by her hospitality and kindness)
– Mr. Stafanini,
– The Friends of Napoleon III,
– The director of the Fondation Napoléon and the team members of the Foundation
– The directors of the museums in Ajaccio, Fontainebleau, Salon-de-Provence, Chateau de L'Empéri, Chateau de Malmaison, Arenenberg, St Helena. I was very honoured to meet them all, also in England, Australia, and here in South Africa.

M.B: Today, what is the biggest challenge faced by the Route du Prince Impérial?

G.F: We need a marketing strategy for the Route du Prince Impérial and I really need help! What is also difficult is clearly marking the road. The panels keep disappearing!
The association, 'Battlefields' Road “always appreciates what I do and includes the monument of the Prince in its marketing, but the Prince deserves his own marketing.