Share it
To mark the bicentenary of the death of the Empress Josephine, a great collector of fabrics, the Paris showroom of the Prelle Manufacture presents "« Joséphine, la passion des étoffes ", from October 24, 2014 (Press release of the exhibition). The prolongation of the exhibition until February 20, 2015 is a great opportunity for napoleon.org to ask some questions to the Director of Prelle-Paris, Maryse Dusoulier. Interview February 2, 2015, translated by Rebecca Young All the images below (© Rebecca Young and Irène Delage apart from the two last ones) are used with the permission of Mrs Dusoulier and the private owners of the gowns and jewels showed in the exhibition Joséphine, la passion des étoffes : Mr. et Mrs Exertier et Mr Labrosse. See more photos of the exhibition on our Facebook Page.

Marie Bruchard: The Prelle house was founded in the mid-eighteenth century. Can you tell us more about the history of this exceptionally longstanding factory?

Maryse Dusoulier: The Prelle house exists under many names actually since the Eighteenth Century. One of several small eighteenth-century institutions, this house is among those that has survived, thanks to its talented directors, who managed to avoid bankruptcy, and by buying other small manufacturers businessess and through careful management of inheritance issues. This is how our archive has survived continuously. It really forms a “war chest” of two and a half centuries. At the end of the nineteenth century the designer Eugene Prelle bought the company which became “la Maison Prelle” and has since stayed in the same family over five generations.

Marie Bruchard: Is it this unbroken line which explains the transmission of the silk weaving techniques today? 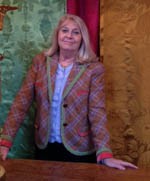 Maryse Dusoulier: Strictly speaking, the techniques existed and still exist in other houses of the Croix-Rousse in Lyon in the eighteenth as early nineteenth. Our house was lucky to have been able to survive long periods of crisis that affected other workshops, including during the “Terror” with the massacres ordered by Fouché, or after the “Commune” that hit the silk industry very hard. The history of these silk-makers of Lyon is fully consistent with the history of France: economy, finance, art, taste… and therefore with Napoleonic history, for example, as our exhibition shows.

M B: What is the specificity of the period of the First Empire in the field of textiles?

Maryse Dusoulier: It is marked by a real revival. To understand this, we must imagine the difficult period that Lyon silk industry went through during and after the Revolution. There was no more trade, no orders, there had been many deaths among the weavers. Napoleon was particularly enamoured of the city of Lyon: the five times he visited there are inscribed clearly in the history of the city, from his return from Italy to the Hundred Days. At each visit, he made a point of visiting the Lyon silk workshops, and had a very acute vision of what should be done to revive the industry in Lyon. There was a real desire for revival through power. From the very beginning of the nineteenth century his numerous orders of damask – a rather simple but very beautiful fabric – were used to “imperialise the royal palaces”, starting with the Palace of  Saint-Cloud. These fabrics herald a new era: we see already the two typical groups of motifs of the First Empire: the floral and the geometric… From the outset Napoleon is aware power of luxury as a political instrument, for fabric as for the other decorative arts. In 1811 and 1813 he made two huge orders: it is said that these two commissions alone represented over a hundred kilometres of fabric.

MB: And when we consider the time required for the production of such quantities of materials…

Maryse Dusoulier: Yes! To make a cut velvet, a very expensive fabric, only ten centimeters can be produced per day, no more, even today just in imperial times. And the Imperial “garde–meuble” did not make concessions to suppliers: he observed the effects of the sun and moon for weeks to test the resistance of the natural dyes!

MB: What do these fabrics tell us about the aesthetic tastes of the Emperor?

Maryse Dusoulier: There are lot of verifiable anecdotes where the Emperor is most insistant for example towards a particular person, especially Josephine: “Madame, you must wear silk!”, which was not Josephine's cup of tea. She preferred lighter fabrics, fine materials that were reminiscent of her islands, as illustrated by the dresses presented in our exhibition. Empire dresses do not look at all like the eighteenth century dresses, all made of taffeta and silk. It is known that Napoleon encouraged his marshals, generals and advisors to wear silk. There is even a 1804 decree defining the clothing of ministers: “The ministers will wear their ordinary costume, which can be buttoned and almost closed in front, made of silk, velvet or cloth with a white scarf, from which the sword is suspended […]”. In a curious way, Napoleon's tastes meant that male clothes began to resemble those of the Ancien Regime. As for the detail of fabrics, there were many intermediaries between the Emperor and manufacturers: Percier and Fontaine sent orders to the Garde-meuble, who in turn sent orders to the manufacturer. But there is evidence in the correspondence, that there was some divergence between Napoleon and Josephine's tastes: In any case, these orders were so important that the Mobilier National was still using them in the 50s, under the presidency of Charles de Gaulle. After that, it was no longer the case and now these fabrics are stored in the magnificent cupboards of the Mobilier National. When we have to redo a fabric dating from that time, we go there to see these historical pieces.

MB: One of your projects is directly concerned with this recreation of Empire fabrics, it is the restoration of the gilded salon of the Empress at Malmaison. Can you tell us more about this project?

Maryse Dusoulier: A few years ago, I started a voluntary association based on a common idea with Bernard Chevallier who was still head Curator of Malmaison who lamented not being able to redo this salon whose fabric was worn to threads. We decided to meet the challenge with a whole group of enthusiasts. Since it is hard to find a single benefactor, especially in these times, we decided to launch an appeal with the help of some events and conferences that took place at least twice a week, for which we asked 5 or 10 euros towards the restoration of the gilded salon. Gradually, after five years, we have been able to restore four chairs and we should be able to do two or three armchairs. I wanted to do it because of my love for that period but the present economic context has not necessarily helped to make this project succeed quickly; it is still in progress … The hope is to be able to see again the “picture” of Josephine and her farewell to the Czar surrounded by his children: it is a very moving painting where the famous fabric of the salon is brilliant. This is the characteristic taste of the Emperor. Unlike the previous period where decoration floated in a blur of flower patterns, tassels and knots, here there is a well thought-out framework, neoclassical, with structuring palms, but which also has a central mandorla with its bouquet of lilacs. This could also have been poppies instead, a flower that the Emperor loved. Finally, the boldness of colours is impressive: the “daffodil- yellow”, (a poetic term of the time to describe the colour) which we have found in parts of the original fabric protected from the light. It is very hard to cross-weave with threads of garnet-red, as is the case here. Both colours can disrupt each other and it is the task of the weaver to find again the right techniques to produce the desired effect, both for the reproductions of original fabrics as indeed for the production of contemporary designs.

Read more: A special issue of the magazine “Connaissance des Arts”, published in 2005, focused on the Prelle silk manufacture. A few copies are available to buy at the showroom.