Share it
"Napoleon and Paris, dreams of a capital". Thierry Sarmant is the deputy director of the Carnavalet Museum and co-curator of "Napoléon et Paris, rêves d'une capitale". In this interview, he tells us about the exhibition at the Musée Carnavalet which explores the incredible program of urban transformation that Napoleon imposed on the capital of his Empire: on the one hand, the design and realisation of essential practical facilities (canals, fountains, bridges, docks, markets, slaughterhouses, cemeteries, granaries ...), and on the other, the monuments and other embellishments, a testament to the glory of the Imperial regime (the Vendome column, the two Arcs de Triomphe ... the sketched (but never realised) plans for the Palace of the King of Rome and the Imperial city ...) “It was one of my greatest dreams to make Paris the true capital of Europe. Sometimes I wished it would become a city of two, three, four million people, something fabulous, colossal, hitherto unknown, and whose establishments would live up to the size of its population" (Napoleon, Memoirs of St. Helena).   This remarkable exhibition is on until August 30, 2015. (Interview by I. Delage, in May 2015).

Irène Delage: Where did the idea for this exhibition come from?

Thierry Sarmant: In 2005, the Carnavalet museum presented a fantastic exhibition dedicated to the the “Femmes fatales” of the Directory period called “Au temps des Merveilleuses”, which was a great success. So we thought it would be good to take a look at the period directly following the Directory, putting the personality of Napoleon at the centre and giving special emphasis to the bicentenary of 1814 and 1815.

Irène Delage: What were the major challenges? What would you like visitors to remember from this experience?

Thierry Sarmant: We bascially wanted to show that the project of an overall transformation of Paris predates Napoleon III and Hausmann. Napoleon I's originality was his grand design for the commercial features and utilities in all the neighbourhoods of Paris, notably: canals, fountains, bridges, docks, markets, slaughterhouses, cemeteries, granaries. The scale of the building works involved is unprecedented in history. 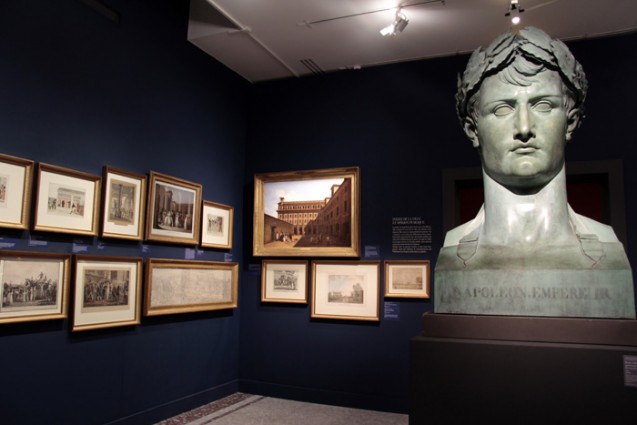 Irène Delage: What were Napoleon's feelings towards the city of Paris ?

Thierry Sarmant: Napoleon had mixed feelings toward the capital: fascination with the place that had witnessed the rise and fall of so many regimes; attachment to the city of his youth; but also distrust, both of the “people of Paris” associated with the memory of “the Terror”, and of the chattering classes of the Faubourg Saint-Germain, whom he suspected (often quite correctly) of being nostalgic for the “Ancien Regime”.
Though he was a great builder, he was also sensitive to the historical heritage. On moving in to the Tuileries Palace – just as so many Kings had done before him –  he was careful to preserve its exterior appearance. We know that he thought a great deal of Alexandre Lenoir's “Musée des Monuments Français” (Museum of French Monuments) [which closed in 1816, but parts of it still exist in the “Ecole des Beaux Arts”].
His favourite residence in Paris was the Elysée Palace, because of the large garden which isolated the palace from the city. 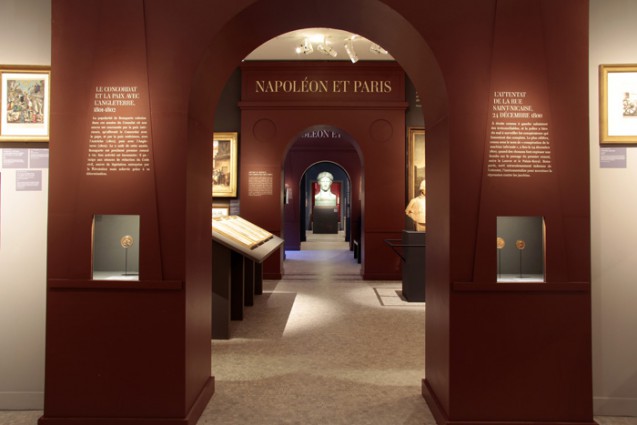 Irène Delage: Wasn't it a challenge to put on exhibitition in a typically Parisian town mansion like the Musée Carnavalet? How did you work with the scenographer Philippe Pumain?

Thierry Sarmant: The configuration of the Musée Carnavalet, close to that of a private residence, imposes quite a specific structure for the exhibition. It also offers a setting evocative of the Paris of yesteryear: the temporary exhibition rooms overlook a beautiful garden, called ” Cour de la Victoire “, dominated by the statue that originally adorned the fountain at the Place du Châtelet.
Our teams have worked with Philippe Pumain for the last twenty years. His exhibition design projects include (inter alia): “Madame de Sevigne” in 1996; “Au temps des Merveilleuses” in 2005; and also  “les Couleurs du ciel” in 2011. He is therefore perfectly familiar with our exhibition spaces. As an architect, he has led the restoration of some important buildings and is familiar with the neoclassical aesthetic we wanted to achieve in the decor of “Napoleon and Paris.”
We asked him to alternate outdoor environments – such as the two “Arcs de Triomphe” and the arcades of the Rue de Rivoli – with indoor atmospheres such as that of the Tuileries Palace. 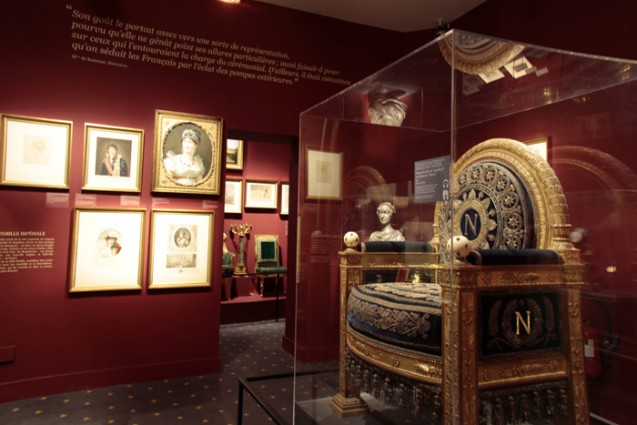 Irène Delage: This exhibition contains over 400 objects, paintings, drawings, and even costumes. In your opinion which 3 or 4 objects are an absolute “must see”?

Thierry Sarmant: The first that comes to mind is the painting by Taunay, which also appears in the exhibition poster: “L'entrée de la Garde impériale à Paris par la barrière de Pantin le 23 novembre 1807” (“The entrance of the Imperial Guard into Paris through the Pantin Gate, 23 November 1807”, loaned by the Château de Versailles). Among the works belonging to the Musée Carnavalet, the most captivating are: the bust of General Bonaparte by Corbet, which greets visitors at the entrance of the exhibition; and the construction-model game representing the arcades of the Rue de Rivoli, which was made for the children of Louis Philippe. And the most striking objects that evoke the atmosphere of the court are the throne from the Tuileries Palace (now in the Louvre collection) and General Bertrand's costume as Grand Marshal of the palace (lent by the Palais Galliera-Musée de la Mode de la Ville de Paris).

Irène Delage: If you had to chose one (or two) of your own favourite objects in the exhibition which would they be?

Thierry Sarmant: the original architectural plan of the rue de Rivoli (lent by a private collector), and the original scale-model of the Pont des Arts.

Florian Meunier (Head Curator of the Musée Carnavalet and co-curator of the exhibition): The great chain of the “Légion d'honneur” that belonged to Napoleon (loaned by the Army Museum in Paris) and the “artist's impression” of Percier and Fontaine's design for a palace for the King of Rome on the Colline de Chaillot (lent by ENSBA – École nationale supérieure des Beaux-Arts).

Practical information about the exhibition (until 30 August 2015) – external link.