Pierre Branda:"On Elba, Napoleon once again took charge of his own destiny" (April 2014)

Share it
In his new book, historian Pierre Branda, Fondation Napoléon Manager of Capital, Collection and Real Estate, recounts how the reign of Napoleon on the island of Elba was riskier than first thought. After the brutal abdication, he reassumed mastery of his own destiny, firstly placing himself under the protection of his ‘best' of enemies, the United Kingdom, and then by reconstituting his environment. Threatened by the secret war waged against him by the allies, Napoleon performed his masterstroke by organising the return to France in 1815. The Eagle had landed once again... (Interview by Laurent Ottavi, April 2014)

Laurent Ottavi: In April, 1814, the defeated Napoleon received sovreignty of the island of Elba. Whose decision was that?

Pierre Branda: Caulaincourt and Alexander imposed Elba on the allies and the Emperor via the Treaty of Fontainebleau. For the former, this destination represented a suitable place to live, one which allowed Napoleon security but which also kept him close to Europe. Caulaincourt ensured that Louis XVIII ratified the treaty. As for the Tsar, he thought that granting Napoleon sovereignty over Elba would not damage the peace process. Napoleon regretted signing the document almost immediately. He was very hesitant right up to his departure: he requested to be taken to the United Kingdom! This was the first time since his youth that decision had been imposed upon him. Almost as soon as he had signed the treaty, he only had one idea in his head: once again to become master of his own destiny.

Laurent Ottavi: The clemency of the Tsar contrasts with the attitude of the French government, in fact the strongest opponent of Napoleon’s departure for Elba. What was the position of the British?

Pierre Branda: The British accepted Napoleon's requests but remained strongly distrustful of him. Nevertheless, the voyage to Elba was to be on a British vessel; Napoléon had no confidence in the French navy under Talleyrand's control. The Emperor was therefore bold to place himself under the protection of the ‘best' of his enemies. He was to try the same thing in 1815, but the British were not to be fooled twice and deported him to St Helena.

Laurent Ottavi: On route to the British ship through France, Napoleon observed the reaction of the people. The journey through Provence left a particularly bad taste. Could we say that he was traumatised by it? 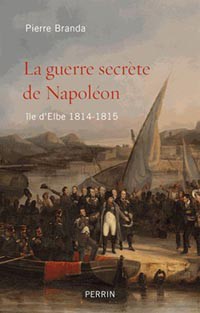 Pierre Branda : Yes. It was the worst moment in his life. He could no longer be sure that the world around him was safe. The passage from Fontainebleau to the French Riviera was not organised by the Imperial Household but rather by Metternich. We must not forget that his probable attempt at suicide (night of 12 to 13 April in Fontainebleau) was still very recent. The Provencal royalists despised Napoleon. At Avignon and at Orgon, his life was in danger. If he had been lynched by the mob – something he was terrified that would happen – it would have been terrible for the Napoleonic legend! Napoleon pretended that it was because he was “caught short” that he needed to wear his courier's uniform and to rush into a nearby inn.

Laurent Ottavi: You quote Napoleon’s words: “I have abdicated; I am at present a dead man”. How was the phoenix to rise from the ashes?

Pierre Branda: When Napoleon said these words he had only one idea in his head: to get to Elba safe and sound. He felt more confident once on board the British ship. However, it was only when he had recreated his environment (etiquette, palace, security) in his principality that he reacquired his old sense of mastery and confidence. His actions on Elba all gravitate around this one aim. He was once again ready to take the initiative.

Laurent Ottavi: In other words a return to France?

Pierre Branda : The secret war waged against Napoleon made Elba even more isolated: bank transactions were impeded, attempts were made to hamper commercial dealings, communications were disrupted. France put Elba under a naval blockade and did not pay Napoleon what she owed her. As per the Treaty of Fontainebleau, the French grenadiers who stayed with the Emperor would lose their French nationality after three years. Furthermore, France appointed the chouan Bruslart as military governor of Corsica, almost a personal enemy of the emperor's. The French consul in Livorno, Mariotti, appointed by Talleyrand kept a close watch on the emperor via spies. Thanks to certain never-before-published archival material, I reveal several of these agents. These documents reveal the intensely hostile intentions of French diplomacy. What with Corsica, and Tuscany under Austrian control, even the Papal States, Napoleon was completely surrounded! He suspected that he was once again to lose control of the situation, either because his soldiers would leave or because the pressure would mount. He had to return to France.

Laurent Ottavi: So Napoleon intended to return to France. But did the allies expect the return of the Emperor?

Pierre Branda : France did not want Napolron on Elba. The island was far too close to Italy and its own territory. Austria rallied gradually to the French position. However, the Treaty of Fontainebleau had only just been signed. The Allies expected Napoleon to try something in Italy with Murat, or at least that was the story they put about so as legitimate the idea of deporting Napoleon to an island further away and deposing Murat from his Neapolitan throne. Napoleon did not however strike in Italy. He outsmarted all predictions and struck where no one expected, in France!

Laurent Ottavi: How did Napoleon and his men deal with this secret war?

Pierre Branda: The Emperor had many Corsicans in his entourage, a fact that has not been noted before. And they had contacts with the east coast of Corsica. There were many partisans of Napoleon there, who discretely forwarded correspondence to France. There was also talk of postal relations with Toulon. This is much harder to prove, but it is possible. Napoleon probably received intelligence that allowed him to get as far as Grenobles.

Laurent Ottavi: What was it made the Emperor decide to leave?

Pierre Branda: This was my main question in this book. There were two decisive things. At the international level, Napoleon wished to leave the island before the Congress of Vienna finished. He feared that the congress would end by announcing his deportation. At the local level, Colonel Campbell informed the Emperor that he would be absent for a few days. It was a window of opportunity which Napoleon could not pass up. The colonel, who was a little cleverer than has often credited, had a surprise for him two days before the departure.

Laurent Ottavi : Thereafter came the Flight of the Eagle up to the Tuileries. IT is often said that Napoleon return was bloodless. Is that really true?

Pierre Branda: People have forgotten about the second expedition to Corsica; that was the scape plan if things went wrong. Napoleon sent men to cause an uprising on the island. The paople had already risen up against Bruslart's policies. Those faithful to Napoleon joined this movement and attacked certain fortresses. As for the Flight of Eagle, I give that a separate detailed treatment. An unfavourable wind or a loose words could compromised the whole affair. The return to France was a high risk operation. Napoleon was of course ready to use arms if necessary. He asked Murat for reinforcements, but in the end the surprise and the speed of his plan meant he didn't need them.