Napo Factfiles. Key details about the First and Second Empires at your fingertips.

All files
Up to
15 years
Young
Historians

The birth of photography

Napoleon Hotline Send your questions to younghist@napoleon.org
Share it

Photography is so omnipresent today -whether in science, advertising, current events media, propaganda, or just our own snaps – it is hard to imagine a world without it. And yet 200 years ago it didn’t exist. In the period between the two Napoleons experiments were underway both in France and in England, and by the time Napoleon’s nephew Louis-Napoleon became Emperor of France in 1852, photography was creating its own small revolution.

The word “photography” literally means “drawing with light”. The word was supposedly first coined by the British scientist Sir John Herschel in 1839 from the Greek words phos, (genitive: phōtós) meaning “light”, and graphê meaning “drawing or writing”. The technology which led to the invention of photography essentially combines two distinct sciences: optics – the convergence of light rays to form an image inside a camera –  and chemistry, to enable that image to be captured and recorded permanently onto a photosensitive (light-sensitive) surface. 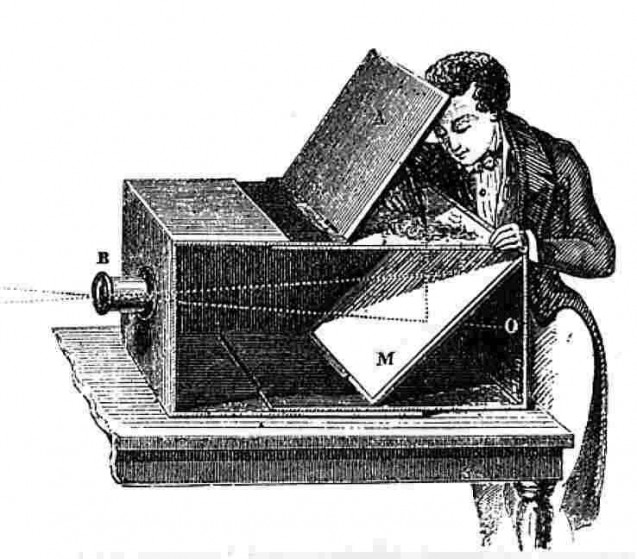 Already during the Renaissance (several centuries earlier) artists had begun to use a sort of primitive “camera” called a camera obscura (a latin term meaning literally “dark room” from which is derived our modern word “camera”) to more accurately copy nature by means of drawing. This naturally-occurring optical phenomenon had already been observed for hundreds (even thousands) of years: If a brightly lit scene or object is placed opposite a hole cut into the side of a darkened space (room or container), the rays of light reflected off that object, passing through the hole, converge into an upside-down image which can be seen to be “projected” onto the surface inside the container. But the camera obscura only allowed for the viewing of that image in real time. In order to record it permanently, artists still had to trace the image by hand inside the camera.

Around 1800, in England, Thomas Wedgwood (son of Josiah Wedgwood, the famous potter) managed to produce inside a camera obscura a black and white negative image on paper or white leather treated with silver nitrate, a white chemical which was known to darken when exposed to light. However, he was not able to fix the image permanently because the lighter parts of the image also became dark when looked at in the light for more than a few minutes. His discovery was reported in a scholarly journal in 1802 by a chemist Humphry Davy and translated into French.

Then, in 1816, (when Napoleon had just arrived on St Helena), a Frenchman, Nicéphore Nièpce, succeeded in capturing small camera images on paper treated with silver chloride (another chemical sensitive to light). However, like Wedgwood, he was not yet able to fix and preserve these images.

So, he began experimenting with other light-sensitive substances, and in 1822, Nièpce invented a process he named “heliography” (again, using Greek words, this time meaning “sun drawing”, from helios and graphê). And in 1826/7, Nièpce succeeded in making the earliest surviving camera photograph. It represented a view from a window at Le Gras (his hometown in Burgundy, France), captured on a pewter plate coated in bitumen diluted in lavender oil. The exposure time was probably several days.

The daguerreotype – the first commercial success

A few years later, Nièpce went into partnership with Louis Daguerre, and together they improved the heliograph process, substituting a more light-sensitive resin and improving post-exposure treatment. After Nièpce died in 1833, Daguerre developed a technique in which a silver-coated copper plate fumed with iodine vapour formed silver iodide when exposed to light in the camera. He made a major breakthrough when he found that a “latent” (almost invisible) image obtained from a brief exposure could be further developed and made visible by exposing it to mercury fumes: in this way exposure times (which previously were several hours) could be reduced to a few minutes. On 7 January 1839, Daguerre’s discovery was presented at a meeting of the French Academy of Sciences, and due to the importance of the discovery, the French government decided to give Daguerre a life-time stipend (salary) in exchange for making the method freely available to whoever wanted to use it, instead of patenting it.

The daguerreotype, as Daguerre’s invention was named, was an immediate success, providing a relatively inexpensive and accurate way of representing scenes and faces which previously had to be drawn or painted by hand. Within a few years, photographic studios had popped up all over Paris and indeed across the world, as the up-and-coming middle classes all wanted to have their portraits taken. It is said that photographic apparatus was taken to St Helena to photograph Napoleon I’s body when it was exhumed in 1840, but that the material was damaged and did not work.

At the same time that Daguerre was perfecting his process, an Englishman, William Fox Talbot, had in 1835 succeeded in producing negative photographic images using a technique similar to Nièpce’s early experiments, and which required a long exposure time (at least an hour). After reading about Daguerre’s discovery, Talbot perfected a method whereby a paper negative could be exposed for only a minute or two, producing a “latent” image which could then be chemically “developed out” and made visible. The resulting translucent negative, despite being less detailed than the daguerreotype, had the advantage that it could be used to make multiple positive copies. Talbot published his results, which became known as a “talbotype” or more usually “calotype” (from the Greek kalos, meaning “beautiful” and tupos meaning “impression”) in 1841, and this became the prototype for the negative-positive printing process which would remain the basis of analog photographic reproduction throughout the 19th and 20th centuries until the invention of digital photography.

Have a look at a video of the calotype process.

Criticism of the new medium

Back in France there was however some resistance to the new technology, especially from artists who may have feared that photographers would put them out of business! Some of them, such as the satirical cartoonist Honoré Daumier, didn’t hesitate to ridicule the most successful photographers and their clients. The poet and art critic Baudelaire saw in photography the gratification of modern society’s innate materialistic and narcissistic tendencies (he would have hated the selfie!): “The foul society rushed like a single Narcissus to contemplate its trivial image on the metal [plate]”.

However, some artists, seeing the new medium’s potential for creativity, actually turned to photography themselves. One of them was Gustave Le Gray, a painter who set up his own portrait studios where he not only photographed friends, family and notable clients he also taught photographic technique to other photographers and even invented new techniques. In 1848, he realised that applying wax to paper negatives made them more receptive to detail. Then in 1850 he invented a glass negative process known as “wet collodion” (which was perfected by Frederick Scott Archer). This method, which provided more detailed images than the calotype but could be reproduced unlike the Daguerreotype, seemed to combine the best of both worlds.

Imperial patronage of the new medium

It was Gustave Le Gray who was the first official photographer to a French head of state – Prince-President Louis-Napoleon Bonaparte, (nephew of Napoleon I) who went on to become Emperor in 1852. Like other monarchs, such as Queen Victoria, Louis-Napoleon quickly realised that photography provided the means to present himself and his family to his subjects as real human beings. Photographs could be reproduced in large numbers and in various formats (from pocket-sized “visiting cards” to special-edition framed prints which imitated traditional painted portraits).

But the new medium was not limited to the lucrative activity of portraiture. Photographers were soon in demand for documenting all kinds of subjects for scientific purposes. Napoleon III himself initiated several of these commissions such as making accurate documentary images of historic buildings all over France that were in need of restoration (known as the “Mission Héliographique”) or reporting on the new military camp ordered by Napoleon III at Chalôns. The Crimean War of 1853-1856 which the Russian Empire lost against an alliance between France, Britain, the Ottoman Empire and Sardinia was the first to be documented photographically.

The beginning of press photography

Before the invention of photography, current events and news were reported principally via the written word or occasionally by engraved copies of drawings or paintings. It was not until 1848 that a photograph of a current event – the barricade of the Rue Saint Maur (25-26 June), part of the ongoing tensions following the 1848 Revolution and the declaration of the Second French Republic – was reproduced (about two weeks after the event!) as an engraving in an illustrated magazine. After 1860, magazines would explicitly mention when an engraving was made from a photograph, and, by implication, lend weight to the supposed authenticity of the scene represented.

The realism of photography adds a unique visual dimension to our understanding of the Second French Empire. We can look into the faces of the protagonists, the Imperial family, other personalities. We can also notice what they chose to show and what they chose not to, just as Napoleon I had carefully organised his public image when commissioning artists to make paintings of himself and his exploits.

Why not have a look at some painted portraits of Napoleon I and compare then with those official photographic representations of his nephew, Napoleon III…