A set of Chambellan Keys

The “Maison de l’Empereur” or “Emperor’s Household” was created after the proclamation of the Empire and was largely inspired by the “Maison du Roi” or King’s Household during the Ancien Régime. This institution went back a long time: sovereigns had always had an officer at their side whose mission was to take care of their private business. The first explicit reference goes back to François I (Francis I of France) who created the office of “Maître des Cérémonies” [Master of Ceremonies]. In 1804, the Empire re-established the étiquette, a ceremonial governing all aspects of the official life of the sovereign and his relations with the court. The experience of Count Louis-Philippe de Ségur (1753-1830), Grand Maître des Cérémonies, well acquainted with the court of Versailles, was a key figure in this respect. His main contribution consisted of his participation in the writing of the Étiquette du palais impérial, the first version of which was published in March 1805, with new expanded editions coming out in 1806, 1808 and 1810.

This punctilious text, which demonstrates the perfectionism for which Napoleon was well-known, details all the habits and customs of the court, as well as the organisation of the Emperor’s life and ceremonies. It should be noted that Napoleon modified an important aspect of the étiquette used by the Bourbons: he made a distinction between private life, which took place in the inner apartments, and public life, which was held in the large apartments.

The Role of the Chambellan

Six great civil officers of the Crown were at the head of the “personal services” of the Emperor’s Household, assisted in their functions by other officers and numerous staff. Among them was the Grand Chambellan [Grand Chamberlain], helped by the Premiers Chambellans (First Chamberlains) – the Palais des Tuileries [Tuileries Palace] had up to sixty-five of the latter. The French word Chambellan (English = Chamberlain) is etymologically linked to the Mediaeval Latin/Frankish words camera/camerarius/Kammerling from which the English terms Chamber and Chamberlain derive. In Imperial France, The Grand Chambellan was “the head of the entire service of the [Emperor’s] chamber  and responsible for absolutely all of the expenses associated with this service,” as explained in the Étiquette du palais impérial. There were four main domains: the wardrobe, the cabinet, the service of honour, and the divertissements/entertainments. His role was, of course, ceremonial, but he also had some important missions to fulfil. He directed the court ceremonies, oversaw the Emperor’s rising and his going to bed, regulated admission to the Emperor’s apartments and audiences, accompanied the Emperor on his travels, governed the festivities in the palace and entertainment at the Imperial court. One of his main responsibities was to ensure that Napoleon was not disturbed. In fact, as the Étiquette repeatedly states, no one was allowed to appear before the Emperor without first addressing the chambellans. Despite this proximity with Napoleon, none of the Grands Chambellans had access to his bedroom. Among those who held the office of Grand Chambellan, the most famous was Charles-Maurice de Talleyrand-Périgord (1754-1838) who held this office from the beginning of the Empire until 28 January 1809.

The Insignia of Office: the Key to the Sovereign’s Drawing Room

The Chambellans were among the most important figures at the Imperial court. They all wore a scarlet velvet uniform with silver trimmings, bought at their own expense. But they were however presented with the insignia of their function, upon their appointment, namely, a vermeil or gilded bronze key. These keys were a present from Napoleon himself, indeed they were paid for out of his own coffers. The key would be attached to the right pocket of their uniform by means of a clasp on the back of the key. In a letter written on 26 March 1812, Napoleon specified to General Duroc that “all [his] chambellans who were ordinance officers or held ranks lower than a general in the army could only wear the chambellan’s key with the chambellan’s uniform or with their civilian dress, but not with the military uniform”. This key symbolically opened only one door, that of the Emperor’s drawing room. All the keys were based on the same model, however the most luxurious ones were made at the workshop of the master goldsmith Martin-Guillaume Biennais (1764-1843). Each key therefore consisted of an oval-shaped ring which was always decorated and chiselled with a garland of oak and laurel leaves, and surmounted by a crown. In the centre, cut with an openwork design, was the imperial eagle with spread wings holding in its claws the bolts of lightning. Beneath it was a grooved shield bearing the cypher or monogram of the sovereign – for the Emperor, an “N” (for Napoleon). The stem of the key was cylindrical and decorated in the middle with a tight ring of vertical leaves. Some keys might also be engraved with two bees. Unlike traditional keys, however, they had no key-bit and ended with a ball. Finally, near the clasp on the back of the ring, they were decorated with a green fabric bow, often made of linen, with gold and silver trimmings, very often a pair of tassels.

As was his custom, Napoleon established a model for the other sovereigns of the Empire. Thus, the Empress, the princes and princesses, as well as the sovereigns had their own “Maisons” [Households]. Since their étiquette was often modelled on that of the Emperor, it was natural that their staff would also include the office of chambellan. Similar keys were also distributed to them. We can identify whose court the keys came from by the monogram of the sovereign inscribed on the shield under the eagle. One of the keys in the Fondation Napoléon collection belonged to the “Maison” of Eugène de Beauharnais (1781-1824), when he was Viceroy of Italy, as revealed by the presence of the letter “E”. Another, bearing the monogram “J N”, is from the household of Napoleon’s older brother Joseph Napoléon (1768-1844), who was King of Spain from 1808 to 1813. The one illustrated in the bottom-right-hand corner of the main picture which differs in shape and style from the other three – the ring is chiselled with foliage, decorated in the centre with the letters “J M” cut with an openwork design under a crown – was one of those given to the chambellans at the court of Napoleon’s brother-in-law and King of Naples, Joachim Murat (1767-1815). Unlike those used in Napoleon’s Household, this key includes a key-bit.

On yet another key, bearing the cypher of the Emperor, the iron crown of the Kings of Lombardy chiselled onto the belly of the eagle of the ring is a direct reference to Napoleon as King of Italy. 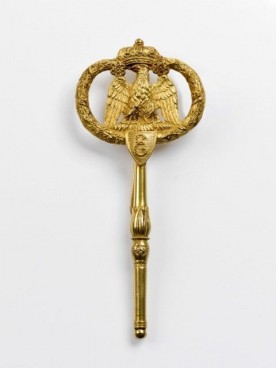 Chambellan's key with the monogram of Prince Eugène, INV 1120 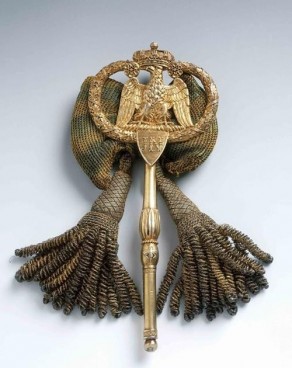 Chambellan's key with the monogram of Joseph Napoléon, King of Spain and the Indies, INV 1125 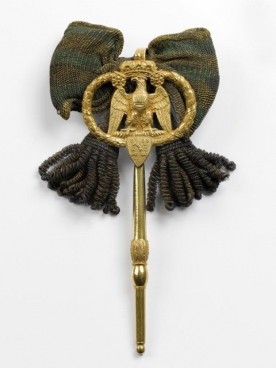 Chambellan's key with the cipher of Napoleon King of Italy, INV 1119 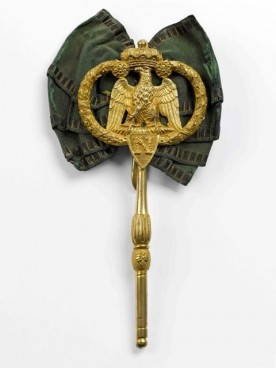 Chambellan's key with the cypher of Napoleon I, INV 1143 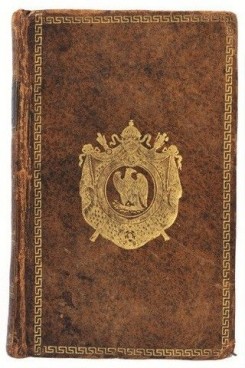 "Étiquette du palais impérial" with the arms of Napoleon I, B5337

During the First Empire, given that more than 110 chambellans were appointed, many keys were distributed. In 1815, despite the exile on St Helena, Napoleon wanted to maintain a certain etiquette. During the captivity, special rules were made and written down in the Règlement du service de Sainte-Hélène. The “Maison Imperial” was reorganised and adapted to the small court that followed him to the southern hemisphere. Only one Grand Officier, General Henri-Gatien Bertrand (1773-1844), accompanied him there, and he was to become the Grand Maréchal du Palais [Grand Marshal of the Palace]. He was given some of the prerogatives of the Grand Chambellan, in particular with regard to who would be allowed to meet the captive. The office of Chambellan was held by Charles-Tristan de Montholon (1783-1853) who was responsible for the running of the Emperor’s Household at Longwood.

Élodie Lefort is responsible for the collection of the Fondation Napoléon. (Translation by Amélie Marineau-Pelletier with Rebecca Young and Peter Hicks, August 2021)

► Several of these keys are on loan for exhibitions of the “2021 Année Napoléon” label:

► Technical details of the objects

Measurements:
The keys with bows are between 17 and 19 cm high. Those without bows are smaller and measure between 16 and 15 cm. It is interesting to note that the largest are those with the monogram of Napoleon.

Napoleon I’s Lost Palaces Napoleon Bonaparte is known as an outstanding leader in war, a tireless worker and for rebuilding work in France and beyond, but he is less known as a lover of…