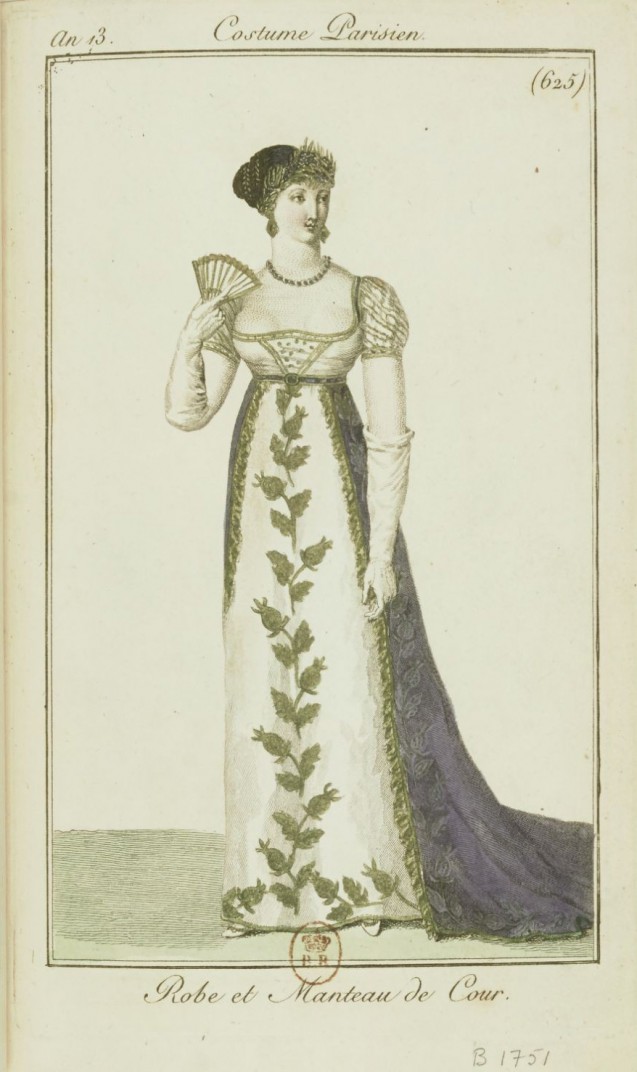 There is one reality that hasn’t changed in over two hundred years: fashion comes and goes due to appearances (or lack of them) in fashion magazines. During the Empire, the one that was in the hands of all the women of the court was the Journal des dames et des modes (All the illustrations can be found in Costumes parisiens de la fin du XVIIIe siècle et du début du XIXe: ouvrage commencé le 1er juin 1797, par Pierre de La Mésangère (here tome 7, years 1805-1806).). It was first published by Sellèque (from 1797), then later it was taken over by Pierre de La Mésangère. From the 1790s, a neo-antique style was back in fashion based on long, floating forms; the lower part of women’s dresses were freed from their former “cages”. Light transparent materials came into vogue, such as muslin and gauze.

The “égérie” of the “Empire style”, the star and trend-setter of the time, was undoubtedly Empress Josephine. Her taste was a sure value and women sought to imitate her at all costs. As his official coronation day approached, Napoleon I, as usual, wanted to control and regulate everything. This dirigisme was reflected in the organisation of the day, in the decoration of Notre-Dame, of course, but also in the clothes worn during the ceremony. To do this, he asked Josephine for advice, but above all he commissioned one of the most famous portraitists and miniaturists, Jean-Baptiste Isabey (1767-1855), to design all the costumes. The new Emperor even had a decree issued on 29 Messidor Year XII (18 July 1804) defining his attire, that of Josephine, of members of the imperial family, of the great dignitaries and the representatives of the “peuple”. Subsequently, the whole of this work would be published in the “Livre du Sacre”.

The train and the dress presented here are similar to that represented in the drawing of the “Princess” in Isabey’s book(A full-colour copy of the Book of the Sacre can be consulted on Gallica (here, the Princess).). The main characteristics of the “Empire” style are clearly identifiable: a high-waisted dress made of a fine and light fabric with a short bodice and small “balloon” sleeves, and below it, a long skirt falling straight to the ground. This dress is made of unbleached transparent silk tulle over a satin underdress. The richness of the embroidery and decorations compensate for the simple form and modest fabric. The whole dress is enhanced with a scattering of floral motifs and, at the bottom, by a band of embroidery with stylised flower motifs.

The magnificence of the dress’s embroideries made of both gold thread and fine gilded-metal ribbons, befitting the importance of the coronation ceremony, is echoed by those of the red silk velvet satin-lined train, which would have been worn attached over the dress beneath the bust. These embroideries take the form of a vegetal garland that runs in a wide frieze all along the edge. For the realisation of these ceremonial garments, it is highly probable that the commissioner hired the best French fashion dealer, Louis-Hippolyte Leroy (1763-1829). This former wigmaker of Queen Marie-Antoinette knew how to please Josephine and indeed had been her official supplier since the Consulate. Given the quality of the materials used, it is possible that Leroy used silk from Lyon.

While very few textiles have survived from that amazing coronation ceremony (What would appear to be Napoleon I’s undress coat is kept at the Château de Fontainebleau. The shoes and braces worn by Empress Josephine are now at the Château de Malmaison. However, two other dresses and trains whose motifs and materials ressemble those of this ensemble are still in existance. They were made for another important event in the court life of the First Empire: namely, the marriage of Napoleon I and Marie-Louise of Habsburg-Lorraine. One is today part of the collection of Bruno Ledoux (cf. Coll., Napoléon intime. Les trésors de la collection Bruno Ledoux, Paris, Seuil, 2018, p. 137), and the other is at the Metropolitan Museum of Art in New York) this dress and train (similar to that shown in the above engraving representing a lady of the court, from the “Book of the Sacre”) give us a idea of the splendour of the costumes made for the event. We know they were made for Claudine Elisabeth Bérenger (1773-1828), wife of conseiller d’État Jean Bérenger (1767-1850). Both of them attended the coronation; Bérenger sat on the first benches to the right of the throne among the dignitaries and his wife was in the tribunes. Having supported Bonaparte during the coup d’état of 18 Brumaire, Jean Bérenger was appointed for life to the Conseil d’État, in the finance section, and participated in the drafting of the Napoleonic Civil Code. He was also General Director of the Caisse d’amortissement, and was made a Count of Empire in April 1808.

Despite the remarkable state of conservation of these two items of clothing (to be seen in the red velvet of the train or indeed the lack of oxidation of the embroidery), they have both undergone restoration on at least two occasions, the last time being in 2018 and 2019. The main objective of this operation was to ensure that their condition could be maintained for future generations. The tulle dress had in fact indeed suffered a lot from the inevitable passage of time: the metal embroidery, in particular that on the lower parts of the dress, had caused tensions and put strain on the tulle, which inevitably has made it more fragile and even caused some tears. The dress therefore needed a considerable amount of consolidation work to stabilise its condition and to prevent further damage. Dust was also removed from both the train and the dress on this occasion. A new mannequin was designed to resemble more accurately Madame Bérenger’s morphology. Despite the restoration operation, the dress remains fragile due to the materials used for its creation. Unfortunately, in order to preserve the two textile pieces in the best possible conditions, it has been recommended that the train no longer be exhibited on top of the dress (as it would have been worn originally). Hence their presentation on two separate mannequins (click to see a high resolution image of the display). A facsimile based on the dress has been created in order to show how the train would have looked when worn over the dress.

This outfit which still belongs to the family of Bérenger’s descendants, is on permanent loan to the Fondation Napoléon since 2004 and it has been presented in several international exhibitions (Jacquemart-André 2004, Malbrouck 2009, Victoria 2012.). Their remarkable state of preservation is due in part to the scrupulous care of the Portier-Kaltenbach family that over the generations has cherished these eloquent remnants of an imperial past.

From Ligny to Waterloo: the confrontations between Napoleon and Blücher in 1815 This exhibition is organised on the occasion of the 200th anniversary of the death of Field Marshal Gebhard Leberecht von Blücher, who died in September 1819. He was one of…