Although Biennais is today associated with gold and silverware, he began his career as a “tabletier” [maker of small objects] in Paris in 1788 (Arch. nat. Y. 9334). A tabletier’s shop was where you could buy any of a thousand small objects, useful or not, for everyday use, for the most part made of turned ivory, notably, devotional objects (mainly crucifixes, statuettes of saints), game-boards, dice, billiard cues and balls, and different sorts of household objects (combs, fans, toothpicks, earpicks, writing cases, various cases, miniature boxes and snuffboxes, walking sticks). In addition to these traditional objects, Biennais quickly specialised in boxes for games and the “nécessaires” that were to make his reputation.

The fact is, in addition to his craftsman’s skill, he possessed unfailing business acumen. Established, as he was, in the rue Saint-Honoré from 1788, in the heart of the Parisian luxury goods district, he managed to get himself noticed very early on after the Revolution, by a clientele eager for such pieces and also by soldiers at the time of the Directoire, among them General Bonaparte himself, to whom he provided a “nécessaire” on credit. From then on, business at his shop known as “Au Singe Violet” grew considerably, and his reputation spread far beyond the borders of the French Empire. The furniture, gold- and silverware, and other pieces displayed in the shop in the rue Saint-Honoré contributed to the influence of French industry and earned Biennais two gold medals at the Exhibitions devoted to the products of French industry.

Through his brilliant success, this man, son of a farmer from Normandy, epitomised the revival of French craftsmanship at this turning point in French history.

This beautifully crafted piece of furniture remained in the tabletier’s family until 2013, when it was donated to the Musée National du Château de Malmaison. It underwent a restoration by the École Boulle in 2017.

Behind the appearance of a fall-front ‘secrétaire’ (writing desk), this piece of furniture used by Martin Guillaume Biennais himself, conceals a multitude of secret, hiding places. On opening the fall-front, the user is surprised by the very compact appearance of the interior. Instead of the usual central compartment surrounded by drawers, there are eight small drawers one on top of the other, above which originally was located a small chest (now lost). The lower panel, which bears no lock, can only be opened when a small button is pressed in the upper part of the cabinet. Once this door is opened, six large drawers can be seen.
Behind these horizontal structures there are more surprises. The cabinet contains twelve secret compartments, and two money trays. Before it disappeared, the chest which used to be behind the desk flap, was removable and was installed in an ingenious sliding mechanism. By manipulating some of the drawers and tilting the shelves at the back, the two well hidden money trays appear. A mechanism must be operated to unfold several levels of drawers and reveal secret boxes. For example, removing the top drawer and tilting the back or side panels reveals two boxes hidden in the intermediate spaces. A needle positioned in a small hole triggers a mechanism to release a box hidden in the top of the chest under the top drawer. 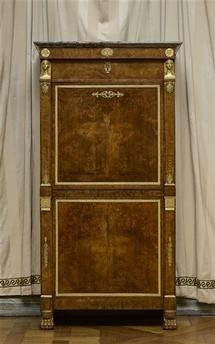 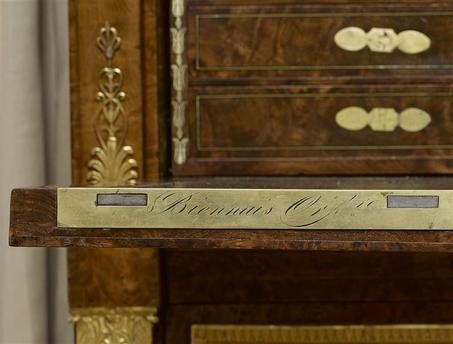 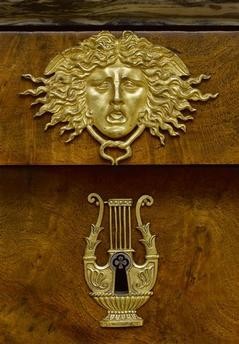 In the lower section, once all the drawers have been removed, the side panels drop away, freeing up shelf space for storing papers. In all, thirteen “secret compartments” of various sizes and shapes are perfectly arranged throughout the cabinet and in all the spaces in between the main structural parts of the secrétaire. And the types of wood used are reminiscent of Biennais’s beginnings as a tabletier: namely, precious burr and juniper wood (the latter has the virtue of keeping insects away and thus protects papers and textiles). This piece of furniture is in fact a giant “nécessaire”, built with a tabletier’s cunning and intelligence. Very wisely, instructions for its use were left inside the cabinet itself by a member of the Biennais family; not however Biennais himself since, despite being a 19th-century hand, the signature is not his. That being said, This luxurious secrétaire sat in his widow’s bedroom in the rue Saint-Honoré at her death in 1859 (with a small fortune in gold coins well hidden inside). In short, it stands as an eloquent witness to the spectacular career of a master craftsman and testifies to his social success, summing up Biennais’s life and art. His signature can be read on the lock of the fall front: “Biennais Orf.re A Paris”.

Isabelle Tamisier-Vétois is a curator at the Musée National des châteaux de Malmaison et Bois-Préau. She is also the curator of the exhibition Martin Guillaume Biennais, l’orfèvre de Napoléon Ier [Martin Guillaume Biennais, Napoleon’s goldsmith], which is being organised at the Caillebotte estate, a partner of the “2021 Année Napoléon” label, to mark the bicentenary of Napoleon’s death. Visitors to this exhibition will be able to admire this piece of furniture from 29 May to 3 October 2021.

Napoleone e il mito di Roma (Napoleon and the myth of Rome) Designed to mark the bicentenary of Napoleon Bonaparte’s death, the exhibition celebrates him by tracing the relationship between the French emperor, the ancient world and Rome. Curated by Claudio Parisi…