The Second Empire, it is true, was built upon the idea of the First, but the liberalisation of the Second (from 1861 on) was not a step that the uncle ever took; at least not until the extraordinary Hundred Days, and even then only half-heartedly. As a result, the political caricatures that assailed Napoleon I (though remarkably effective) came from abroad. With the acceptance of a loyal opposition, Napoleon III was to prepare the ground for political caricature that would first destabilise the regime and then later destroy its reputation, this time from within France.

The artist of the caricature here (signed simply as ‘H’ on the cover of the collection) was Paul Hadol, born in Remiremont in north eastern France in 1835. He later moved to Paris where he would establish himself as an illustrator and portrait cartoonist, working under his own name, or sometimes under his pseudonym ‘White’. Throughout his career he worked for newspapers and magazines such as ‘Charivari’, the ‘Gaulois’, and ‘La Vie Parisienne’, producing at the beginning of his career portrait caricatures of figures from the world of music and the stage before later turning to political figures and subjects. He also created many theatre posters. He died in 1875 in Paris.

His best-known work today is “La Ménagerie Impériale”, an undated series of 31 broadsheet, unbound portrait caricatures negatively portraying the Emperor, his family members, and key figures of the Second Empire as animals in a sort of zoo. The collection was produced by the printers Coulboeuf and sold at the Bureau des Annonces, 11 rue Taitbout in Paris and also at the office of the satirical journal L’éclipse¸ a paper that Hadol worked for, founded in 1868 out of the remains of a periodical called La Lune that had been banned for offensive caricatures of Napoleon III.

The cover for the caricature series shows Marianne wearing the Phrygian bonnet of the Republic as a female fairground figure, pointing to the sign for the Imperial Menagerie/Zoo. She bids viewers go behind a curtain to see the show. At the entrance stands the inscription “Le grand vautour de Sedan” [The Great Sedan Vulture] under a very rough copy of the caricature of Napoleon III, thereby offering the date of the defeat at Sedan (1 September 1870) as a terminus post quem for the series. This, the first of the 31 illustrations to be found inside, shows Napoleon III as a ‘fierce’, ‘cowardly’ vulture, clutching a maimed woman (marked as ‘France’) in his bloody talons. Other images from the collection include the Empress Eugenie as a crane in a ‘foolish pose’ and Pierre Bonaparte as a ‘wild’ and ‘brutal’ wild boar (he killed the journalist Victor Noir in a duel earlier in the year (10 January), causing outrage in opposition and republican circles). Ministers and other Second Empire figures such as Rouheur, for example, are likewise brutally pilloried. 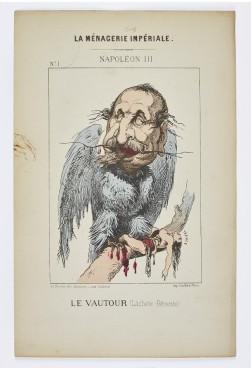 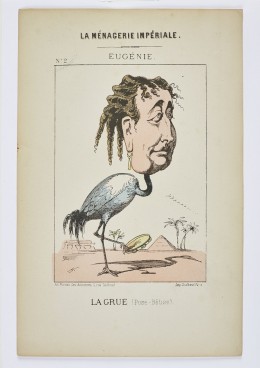 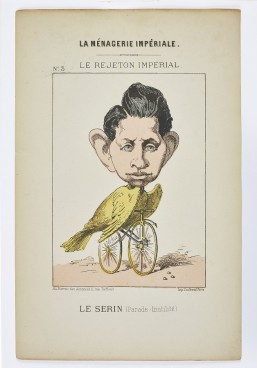 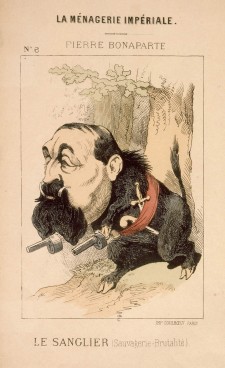 Hadol’s caricatures would fix in visual imagery the Republican opposition’s visceral hatred of the Napoleonic regime that ended in the debacle at Sedan. And given the comparatively large number of copies still existing, the portrait would appear to have found an audience, indeed visually tarring the Second Empire for almost one hundred years after. Only post-WWII would France begin to evaluate in a more balanced manner Napoleon III’s twenty years in power.

For Hadol, on the other hand, the fall of the Second Empire and the rise of Prussia would provide him with inspiration for another iconic satire, a “drolatique” or ‘funny’ map of the geopolitical situation in Europe in the second half of 1870 and at the beginning of 1871. This was to be even more successful than the “menagerie”, finding an international market, being translated into English and German (at least) and sold in the US. That still famous image (click here for the French version and here for the English version) charts in a more general manner the seismic changes that took place in France and in German-speaking lands at the turn of 1870-71. And that new German Empire under Prussian control, consecrated at Versailles, would pave the way inexorably towards WWI.

→ The Fondation Napoleon has a copy of the Ménagerie Impériale in its collections.

Appendix : a complete list of the the caricatures with their number, the person featured, and the animal the person is depicted as, with their character traits in brackets. Click on each name to see their caricature on Gallica/BnF.