This picture of Germaine de Staël was painted by Marie Éléonore Godefroid (1778-1849), a pupil of the famous court portrait painter during the Empire and the Restoration, Baron Gérard. Godefroid became Gérard’s assistant from 1795, and from the 1800s she presented her own paintings, often portraits of the offspring of well-known figures (the children of Marshal Ney, for example, those of the Police minister Savary, of Queen Hortense, and of the Duc d’Orleans). She would later be noticed for the portraits she executed of two of the people she admired most, namely, Jacques-Louis David (painted between 1814 and 1825) and her own teacher, Baron Gérard (painted in the 1820s). Gérard not only allowed Godefroid to contribute to some of his paintings, but he also very often entrusted her with the commissions received for reproductions of some of his works. Indeed, Godefroid’s style is so similar to Gérard’s that there has been some confusion, and some works previously falsely attributed to the Baron have been re-attributed to Godefroid.

The striking similarity between this portrait of Madame de Staël and that painted by the Baron himself (supposedly completed in 1810, pictured below) shows Godefroid’s talent as a copyist. 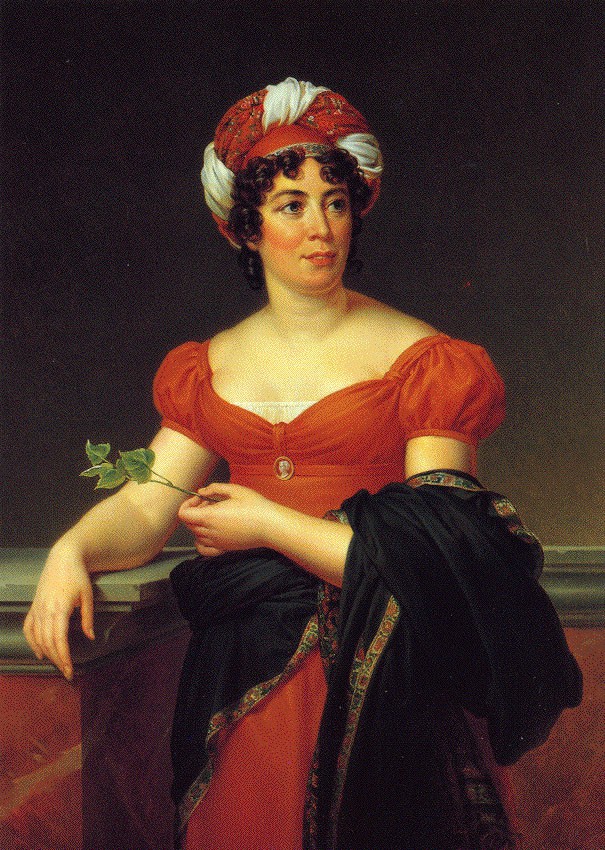 Apart from the differences in colour (of the dress, cashmere stole and wall panels), the two paintings are identical down to the last details: the sitter’s slightly parted lips; the cameo on her dress; and indeed the very angle of her hand which holds the same small leafy branch.

Furthermore, even though the colour palette of the two portraits is inverted it remains nevertheless quite similar: shades of white, black and red are all present although distributed differently on each respective canvas. These alterations in colour are about as much artistic licence as Godefroid has allowed herself with her own version of the master’s original. One element which does not vary at all between the two paintings is the turban, whose colours and folds are absolutely the same. Germaine de Staël was fond of the orientalist turban, the fashion for which originated in Great Britain – her adopted country – and which became popular between the years 1790-1820. Indeed, she was so often depicted with this accessory that, in the eyes of posterity, she has forever been associated with it – just as Napoleon was with his bicorne hat.

We cannot be certain that Madame de Stael actually posed for the original portrait by Gerard: it is difficult to determine when such sittings could have taken place given that in 1810 (the supposed date of Gerard’s painting), Germaine de Staël, who was the daughter of the Swiss banker Jacques Necker, former minister of Louis XVI, had already been living in exile for seven years far from Paris, on the orders of the First Consul. And after Napoleon became Emperor, he did not relax the surveillance of this troublesome woman. Indeed, she did not return to Paris until after the fall of the Empire. Madame de Staël, who was an intellectual philosopher in the tradition of the Enlightenment, spent her time in exile between the family home at Coppet, Switzerland, interspersed with numerous trips – to Germany in 1803, then Italy in 1805, and Vienna in 1807. Furthermore, considering Napoleon’s disapproval of her book Allemagne (Germany) which was immediately censored upon its publication in 1810, it is doubtful whether Gérard would have produced such a flamboyant portrait just at the moment when the learned woman’s disgrace was at its height. Moreover, the mature features of Germaine de Staël in a portrait by Vladimir Borovikovsky, executed during her stay in Russia in 1812, simply do not correspond to the much younger face we can see in Gérard’s painting. This would suggest that the portrait by the baron could have been concocted from much earlier sketches, made around the beginning of the nineteenth century. We know that much later (between 1819 and 1821), Gérard would make another (posthumous) picture of Madame de Staël as Corinne, bearing the same un-dateable features.

Despite the uncertainties surrounding the relative dates for the portraits by Gerard and the subsequent copy by Godefroid, Madame de Staël’s strong personality and poetic exaltation are clearly visible in this painting. Germaine de Staël is famous for her brilliance and originality. Her written work reflects her two fundamental character traits: she was both passionate and strongly influenced by Protestantism. In her published novels (Delphine in 1802 or Corinne in 1807) she was part of the first wave of Romanticism in French literature. She also wrote historical, cultural, moral or philosophical analyses including Allemagne (censored in 1810, but published in Britain in 1813), Réflexions sur le suicide (Reflections on Suicide, 1811) or Considérations sur la Révolution française (Considerations on the French Revolution), written between 1814 and 1815 and published after her death.

In the biographical preface to Madame de Staël’s Mémoires d’exil (Memoirs of Exile), her cousin explained that “in conversation Madame de Stael was regarded as an extraordinary person. But in writing, however, she counted among those spiritual authors, who were excluded from the highest rank because of certain stylistic mannerisms.” Yet whilst criticised for this “emotional” style, she was, on the other hand, considered a formidable political opponent to Napoleon. She denounced with determination the dangers of allowing one man to take power, though she was never to have even the slightest influence over Napoleon, despite her many attempts. After Napoleon’s exile in 1814, she showed a certain sympathy for the fallen Emperor, doubtless seeing him then as one of her beloved Romantic figures. Fiercely independent, she defended, until her death in 1817, a vision oscillating between liberalism and prudence, summarised by her cousin thus: “as much in France as everywhere else, her inclination led her to attach herself to the moderate and conservative opposition, without ever separating herself entirely from the government party”. As an author, Madame de Staël was a forerunner but she was also one of the first great women political thinkers, and indeed was recognised as such in her own time.

This portrait can be seen during the exhibition on the Emperor Napoleon I at the Museum of Fine Arts in Arras, created in partnership with the Château de Versailles, which will be held from 20 October 2017 to 20 November 2018.

Napoleon and Paris (1799-1815). Urban metamorphoses Presentation of the exhibition During the revolutionary period, the nationalisation of Church property and part of the nobility’s property enabled the State to become a major landowner. During the First…