Home » Magazine » Interviews » Pierre Branda: thanks to his clandestine writings “instead of being forgotten as the British government had hoped, the emperor Napoleon was still being talked about” in Europe (May 2021)

Pierre Branda: thanks to his clandestine writings “instead of being forgotten as the British government had hoped, the emperor Napoleon was still being talked about” in Europe (May 2021)

In 1817 and 1818, Napoleon had three works published in London in order to mobilise public opinion for his return to Europe. Pierre Branda details this extraordinary “literary breakout” in his Écrits clandestins, the new title in “La Bibliothèque de Sainte-Hélène” series published by Perrin*. (Interview by Irène Delage, May 2021). 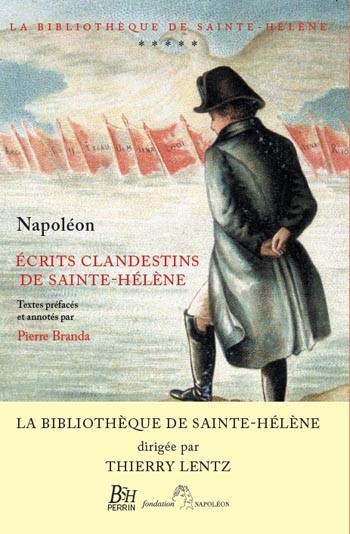 napoleon.org: In your new book, you present three little-known and very unusual texts written by Napoleon on St Helena in order to mobilise public opinion for his return to Europe, a return he believed in until March 1819, when he learned of the fateful decision of the Congress of Aix-la-Chapelle (29 September-21 November 1818) to keep him in exile on St Helena. But return to the starting point of this publishing adventure: in November 1816, a book appeared in London that was to lead the Emperor to make a decision.

Pierre Branda: Indeed, one eye-witness account became a bestseller, that of the surgeon of Northumberland, the ship that took Napoleon to St Helena, a man called Warden. Warden published a text, written out as letters, in which he recounted his alleged encounters with Napoleon and transcribed what he said he had heard from the Emperor himself. The important thing was the impact of the book. It was then realised that every word from St Helena excited the English public. On hearing the news, Napoleon soon realised that he had to react and began to write a text in letters himself. For this first book, Napoleon locked himself up with his officers for more than ten days to draw up what was to be entitled The Letters from the Cape of Good Hope. But how could they be published? He could not appear as the author because as a prisoner he was forbidden to do so and this could prove dangerous. He therefore chose anonymity but gave credibility to his words by leaving a few clues that the author had been in close contact with Napoleon. In the autumn of 1817, when Napoleon’s first anonymous work appeared in London, it was an immediate success. On the strength of this first success, the captive wrote a new series of texts in letter form under the title Lettres d’un capitaine de Storeship [Letters of a storeship captain], followed by a third manuscript, Manuscrit de l’île d’Elbe, des Bourbons en 1815 [Manuscript of Elba, from the Bourbons in 1815]. Each time, the same procedure was used, no author’s name but enough clues to indicate that the author was someone who had known him well and been close to him. These two latter books were also published, and they reinforced the publicity surrounding Napoleon’s captivity on St Helena. Thus, instead of being forgotten by being confined to this remote island as the British government had hoped, the Emperor was constantly in the news.

napoleon.org: You write that we are in the presence of “three styles, three arguments, three books, three battles fought by an exceptional communicator”. Can you tell us what is special about these three texts?

The Letters from the Cape of Good Hope are designed to complement Warden’s work, which was already rather favourable to Napoleon’s cause. In this first book, the captive returns to his epic in order to respond to the polemics concerning him. He gives his version of the facts, for example about the episode of the soldiers sick with plague that he had to abandon to the Turks in Jaffa in 1799 during the Syrian campaign. Very early on, he therefore wanted his version of events to be disseminated, less for posterity but more for his contemporaries whom he still intended to influence. The letters of a supposed ship’s captain on St Helena form an account of Napoleon’s captivity. They are astonishing in more ways than one, so lively and even piquant is their style. The great moment of this pure fiction is certainly the meeting between the false sailor and the imprisoned Emperor. It is as if Napoleon was duplicating himself to evoke his own person. However, his aim is not literary but political. In this second book, he denounced with force, and sometimes exaggeration, the conditions of his captivity in order to see them changed under the pressure of public opinion. The Manuscrit de l’île d’Elbe, des Bourbons en 1815 is presented as a long speech aimed at demonstrating his full legitimacy as sovereign. To support his point, Napoleon goes back over the monarchical history of France in detail and tries to demonstrate that each dynasty derives its power from the Nation, whatever the period. From his point of view, the Bourbons who had returned to the throne thanks to foreign armies alone could only be illegitimate. The real sovereign is therefore him or his son and no one else.

napoleon.org: Given his status as an “extraordinary prisoner”, against whose escape exceptional means had been put in place, and whom it was hoped contemporaries would forget (far-off island, warships cruising off the coast, garrison, etc.), how did Napoleon manage to get the better of the British authorities in this way?

Pierre Branda: Never in the history of the world has so much been done to keep a single man prisoner. And yet Napoleon was able to publish as a free man. This publishing adventure was made possible by the deep disunity of the British. Many of King George’s subjects did not agree with the treatment of Napoleon. It was therefore easy to convince some of them secretly to transport letters and manuscripts written by the captive or his companions to London. It should be added that they were paid very generously for their help. For their services, each clandestine messenger received several thousand gold francs. In this affair, Napoleon outplayed the British government and its main representative on the island, Hudson Lowe, in the most sophisticated way. The latter would only find out later where the anonymous writings on St Helena really came from. In any case, it would have been particularly embarrassing for them to reveal everything and thereby expose themselves to the fiercest criticism and to the ridicule of having been unable to prevent such a literary escape.

► The other titles in the series “La Bibliothèque de Sainte-Hélène” are:

Napoleon, the last act Dedicated to the final moments of Napoleon Bonaparte’s epic deeds, the Rome Napoleonic Museum’s exhibition aims to illustrate the events of the Emperor’s exile and death on St Helena through…